James Heckman, Nobel Laureate in Economics and Professor of Economics at the University of Chicago, delivered a lecture organized by the HKUST Jockey Club Institute for Advanced Study and cosponsored by HKUST IEMS drawing from recent advances in economics, sociology, and child development to emphasize the critical importance of early-childhood social, emotional, and cognitive skills in explaining outcomes in adulthood. Enhancing these skills during youth is key, Prof Heckman argues, to tackling the problem of growing income and opportunity inequality in developed and developing countries alike.

Inequality is on the rise around the world, and is closely linked to social mobility. Prof Heckman also pointed to empirical evidence from economics linking income inequality and intergenerational mobility, where less income-advantaged families face difficulties in financing their children's education, and in providing them opportunities. This is a serious concern in many places around the world. Some economists believe that inequality is a cause of immobility. On the other hand, the causality might run the other way: low mobility might explain inequality.

Given rising inequality, income redistribution has become an increasingly popular topic. While taxation and transfers may have varied effects on alleviating inequality, Prof Heckman proposed a broader, complementary approach to addressing inequality, namely the development of skills and capabilities that allow people to function better in the economy and fit into society. Prof Heckman’s premise is that people with larger skill and capability sets have more freedom to shape their own lives, and those with fewer have more limited choices.

Prof Heckman noted several key lessons from recent findings in economics, sociology, and developmental psychology for skill development. The first lesson is that skills vitally affect performance in life along many dimensions, such as the likelihood of marriage and divorce, health, the ability to stay on task, etc. A second lesson is that gaps in both cognitive and non-cognitive skills across socioeconomic groups emerge at early ages, even before children begin attending school.

The third lesson is about the role of genetics in fostering skills. While genetic heritability plays a part in the development of skills in children, the evidence suggest that parenting and learning environments play more important roles. Fourthly, there are critical and sensitive periods in child development, with Prof Heckman citing the fact that one’s intelligence quotient (IQ) becomes rank stable around the age of 10. As previously touched upon, the fifth lesson concerns the substantial differences in children’s environments, with children of professional parents hearing as many as four times as many words at age three than those from disadvantaged families.

The sixth lesson, Prof Heckman continued, is that initial disadvantages have a lingering effect that society can partially compensate for. For example, for neglected children, programs targeting socio-emotional and character skills through mentoring are particularly effective. The seventh lesson relates to the importance of “scaffolding”, meaning that staying with a child, working with her, and challenging her to take the next step in the “proximal zone” of development through interaction (rather than lecturing) is critical. The final lesson Prof Heckman stressed is the value of early investment, where the skills and abilities created at early ages can propagate throughout one’s life.

Concluding the discussion, Prof Heckman emphasized that social and emotional skills support cognitive skills, that cognitive skills lead to better health, and that it is easier to change the skill base of children at early in life rather than later. The early years are especially important because of the malleability and flexibility of young children. Later in life, while certain skills are still malleable, the full base of skills is not. Into adulthood, the skill base plays a powerful role in producing adult outcomes.

Prof Heckman underscored the effectiveness and fiscal prudency of early childhood intervention to address social and economic inequality. While economic redistribution can alleviate some problems of poverty and inequality, disadvantaged families can also greatly benefit from measures to improve parenting skills and to provide a better environment to nurture their children’s capabilities.

This lecture will present recent research on the economics, psychology, and neuroscience of creating capabilities - the capacities to function in the economy and the larger society. Capabilities are multiple in nature. Performance in different tasks requires different combinations of capabilities. Capabilities are skills shaped by parenting, schooling, workplaces, and interactions with peers and mentors. They also have a strong genetic basis. This research moves the conceptualization of skill and its measurement beyond the usual focus on schools and scores on achievement tests to a broader notion of the skills (capabilities) that matter and how they can be measured. It analyzes the life cycle evolution of capabilities. Different stages of the life cycle are relatively more productive in creating different capabilities. Early childhood is productive for creating all capabilities. Capabilities act synergistically in creating future capabilities. The implications of this analysis for policies to promote capability formation and for analyzing poverty, social mobility, and economic and social opportunity are developed.

James J. Heckman is the Henry Schultz Distinguished Service Professor of Economics at the University of Chicago, a Nobel Memorial Prize winner in economics and an expert in the economics of human development. Through the university's Center for the Economics of Human Development, he has conducted groundbreaking work with a consortium of economists, developmental psychologists, sociologists, statisticians and neuroscientists showing that quality early childhood development heavily influences health, economic and social outcomes for individuals and society at large. Heckman has shown that there are great economic gains to be had by investing in early childhood development. Professor Heckman's work has been devoted to the development of a scientific basis for economic policy evaluation. His recent research focuses on human development and lifecycle skill formation, with a special emphasis on the economics of early childhood development. His research has given policymakers important new insights into such areas as education, job-training programs, minimum-wage legislation, anti-discrimination law, social supports and civil rights. Prof Heckman often shares his insights on Twitter @heckmanequation. 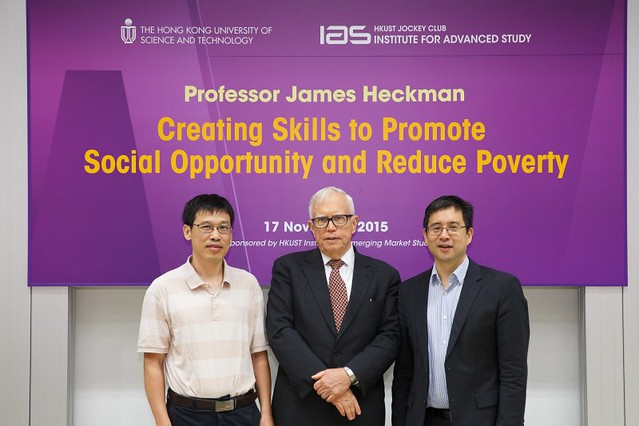