Corruption and Insider Trading: Evidence from Credit and Housing Markets

Sumit Agarwal, Vice-Dean of Research at the School of Business and Professor in the Departments of Economics, Finance, and Real Estate at the National University of Singapore, presented a practical approach to detecting corruption and insider trading behavior in the credit and housing markets, and the extent to which corruption impacts South Asian countries in particular.

As complicated as this issue may seem, Dr. Agarwal boiled down the heart of the corruption issue to the concept of “quid pro quo”—Latin for “something for something”—or, in this case, the idea that politicians and bureaucrats are willing to trade public resources for money or other personal benefits.

One of many examples included banks which give loans to politicians for their personal use, and allow the politicians to later default on the loans with little to no repercussions. In return, the politicians deposit public funds into the banks providing them with much needed liquidity. This example was supported by data showing the significantly lower interest rates offered to bureaucrats versus the general public, significantly higher levels of delinquency and reinstatement of loans to bureaucrats compared to the general public, and subsequent government decisions to deposit public funds into the same banks offering the loans. In another example demonstrating how difficult it can be to actually bring evidence against corrupt politicians, the spouses of Asian politicians and bureaucrats can open businesses such as art galleries where those wanting to curry political favors can purchase art works at extremely inflated prices. As evidence of their purchase, the buyers then gift these same art works to the politician or bureaucrat married to the owner of the art gallery.

Such seemingly blatant corruption is, according to Dr. Agarwal, difficult to prove. Although he used euphemistic terms like “greasing the wheel” to demonstrate the commonality or even necessity of such corrupt behaviors in South Asia, Dr. Agarwal did not hesitate to condemn such corruption for having a truly destructive impact on society, where the personal benefits received by politicians and bureaucrats come at the expense of regular borrowers and depositors in the form of higher interest rates, increased risk of banking insolvency, and overall diminished economic growth for a given region or country.

In this lecture, Sumit Agarwal will discuss how regulators can detect corruption and insider trading behavior. Corruption costs the world over 1 trillion dollars annually. Most people agree it is value destroying. So, if we can try to minimize the role of corruption it would be a worthy goal. The speaker will cover three cases from around the world. In the first case, he will look at how banks influence bureaucrats by providing them higher lines of credit and then let them default and reinstate their account. In return the bureaucrats give the banks cheap source of deposits. In another example, he will also discuss how bureaucrats use inside information to benefit in their housing transactions at the cost of the general public. Finally, in a third example, he will discuss how banks give loans to firms in the districts of politicians who held influential portfolios.

Prof Sumit Agarwal received his MA and PhD in Economics at University of Wisconsin-Milwaukee at 1995 and 1999. He joined the Bank of America in 2004 and was a senior vice president and credit risk management executive in the Small Business Risk Solutions Group. He was then appointed the financial economist in the research department at the Federal Reserve Bank of Chicago in 2006 and joined the National University of Singapore in 2012. He is currently the Vice-Dean of Research and the Low Tuck Kwong Professor at the School of Business and a Professor in the departments of Economics, Finance and Real Estate at the National University of Singapore. Prof Agarwal’s research interests include issues relating to financial institutions, household finance, behavioral finance, international finance, real estate markets and capital markets. Prof Agarwal received numerous awards including the J Walter Elliot Award for Excellence in Macroeconomics (1995), Terker Family Prizes in Investment Research Award by Wharton School of Business (2009) and the TIAA-CREF Paul A. Samuelson Award (2011). Prof Agarwal was an HKUST IAS Senior Visiting Fellow. 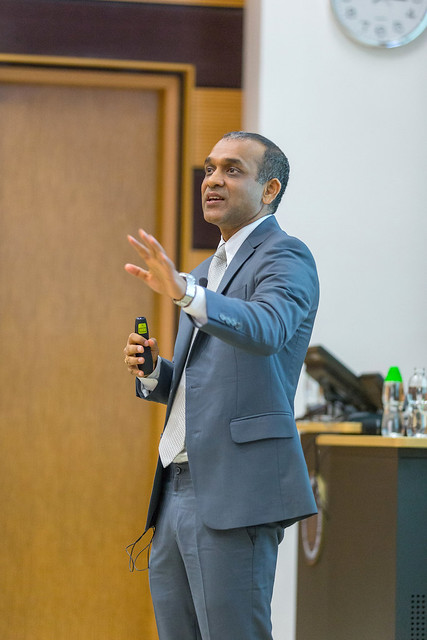 This event was co-sponsored by the HKUST Jockey Club Institute for Advanced Study and the Department of Finance at Hong Kong University of Science and Technology.