Finding the Diamonds in the Rough: Welfare Comparisons of Two Targeting Mechanisms in Microcredit

While traditional JLL microcredit schemes have the advantage of more capable borrowers as a result of group self-selection, they have also been criticized for not increasing borrowers’ income levels or assets. For this reason, Prof Visaria sought to improve on some of traditional microcredit’s shortcomings while leveraging local information. Under the TRAIL scheme, borrowers are responsible for their own loan while new borrowers are selected into the scheme by an appointed agent, typically a local trader or shopkeeper who are offered commissions based on each borrower’s repayment rate. After replacing JLL with knowledgeable local agents, the TRAIL scheme led to higher repayment rates and still succeeded in recommending productive and capable borrowers.

However, Prof Visaria is unsure if the model is ready for wider implementation. “We don’t know whether the schemes would work in all contexts... What would happen if you had... multiple agents in the same village... Would they compete?” Prof Visaria also believes that microfinance institutions would do well to continue research into alternative microcredit delivery mechanisms. “They can learn from what we have done and what we’ve found and the mechanisms that we highlight in our research. To see if they can use similar methods to change the models and see if that can generate positive change for borrowers...”

The latest round of results have demonstrated that microcredit has potential as a powerful tool to alleviate poverty. What is needed is more research and development, beyond the tried- and-tested microfinance models.

We examine the distributive impacts of two alternative approaches to deliver agricultural credit to smallholders: TRAIL (or trader-agent intermediated lending), where local traders recommend village residents for individual liability micro-loans, and GBL (or group-based lending), where households self-select into groups and receive joint liability loans. We use data from a field experiment in eastern India to estimate how the effects of these schemes differ by households' economic status (proxied by landownership), and social status (proxied by caste and religion) of households. We find that TRAIL loans increased farm incomes for all land groups, but particularly for landless households. As a result, across land groups, the TRAIL scheme generated significantly greater welfare than the GBL scheme, irrespective of inequality aversion. The GBL scheme generated larger effects among the socially disadvantaged minority groups, so that it had weakly larger welfare effects at high degrees of inequality aversion. This suggests that TRAIL might dominate GBL on both efficiency and equity dimensions when households are differentiated by economic status, but that comparisons are ambiguous when households are differentiated by social group. This is joint work with Pushkar Maitra, Sandip Mitra and Dilip Mookherjee.

Sujata Visaria is a development economist and an assistant professor in the Department of Economics at HKUST. Her recent and ongoing research studies alternatives to traditional microcredit models, financial choices made by migrant workers, and middlemen margins in agricultural markets. She is an affiliate of the Bureau for Research and Economic Analysis of Development. She serves on the board of directors of the Asian Migrants Credit Union, Hong Kong’s only credit cooperative of and for migrants.

View the slides on SlideShare 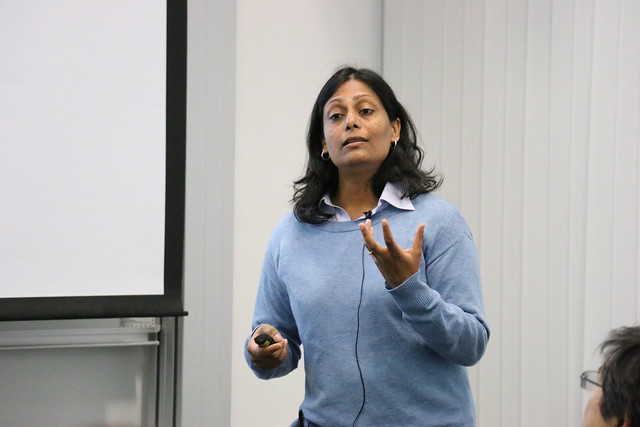