Workshop on Comparative Studies of Regional Governance in China and Russia

Cosponsored by the International Center for the Study of Institutions and Development (ICSID) at the Higher School of Economics (HSE), HKUST IEMS hosted this two-day workshop at the HKUST campus. The focus of the workshop was on the latest empirical research on the political economy of local governance and state-business relations in Russia and China, featuring leading scholars from Russia, China, Hong Kong, and the US specializing in the analysis of micro-datasets on local government officials and firms in Russia and China.

Ora John Reuter, Assistant Professor of Political Science at the University of Wisconsin, began the workshop with his study on the curious fact that officials in competitive authoritarian regimes such as Russia are appointed and reappointed regardless of the economic performance of their assigned region. Prof Reuter analyzed the variation in political appointment patterns across Russia’s 89 regions, focusing on over 3,500 regional vice governors with economic policymaking responsibilities between 2001 to 2012. His results show that performance-based appointments were significantly more prevalent in the less politically-competitive regions of the country. As for the more politically-competitive regions of the country, Prof Reuter attributed the lack of performance-sensitivity to “electoral-machine politics”, where the ability to deliver votes and to establish personal connections with top leaders dominate economic performance when it comes to appointments, an argument corroborated by previous qualitative studies.

Pierre Landry, Professor of Political Science and Director of Global China Studies at NYU-Shanghai, presented his work on political selection along the Chinese administrative ladder. Specifically, Prof Landry attempted to reconcile the mixed evidence connecting economic performance to political loyalty in China’s cadre promotion system. To measure both promotion and the fiscal competence of China’s officials, Prof Landry examined the political appointments of party secretaries and government executives between 1997 to 2007 across a wide swath of China’s provinces, and controlling for such factors as fiscal revenue, local GDP, and relative growth rates. His main finding was that economic performance drives promotions at the lower levels of the Chinese government, whereas loyalty drives promotions at higher levels of government.

On the topic of how and why new electoral arrangements in China affect who gets elected to local and regional congresses, Melanie Manion, Professor of Public Affairs and Political Science at the University of Wisconsin–Madison, discussed the new electoral rules for township and county congresses in China, where Chinese voters share selectorate power with the Communist Party, but where the Party has veto power over which nominees can appear on the ballot. Prof Manion analyzed data from surveys of over 4,000 popularly- elected delegates in 24 township congresses and 18 county congresses in 4 Chinese provinces. Prof Manion’s analysis shows that voter-championed ballot nominees exhibit qualities that suggest they will represent community interests, such as being a longtime community resident or recognized as a community leader. On the other hand, Communist Party-championed ballot nominees display a different set of qualities, such as Communist Party membership, holding an official party or government post, a higher-education degree, or having trained at higher-level Communist Party schools.

Thomas Remington, Professor of Political Science at Emory College, presented his work comparing pension reform in the authoritarian regimes of Russia and China and contrasting the history of the pension policies in the two countries since the 1980s. Among the many points of comparison and contrast, Prof Remington highlighted two key differences: administrative decentralization (where China is much more administratively decentralized than Russia) has a significant influence on pension policymaking, whereas leadership turnover (where Russia has a much more stable roster of top officials than China) did not.

The program can be found here (PDF).

A selection of presented papers can be downloaded here. 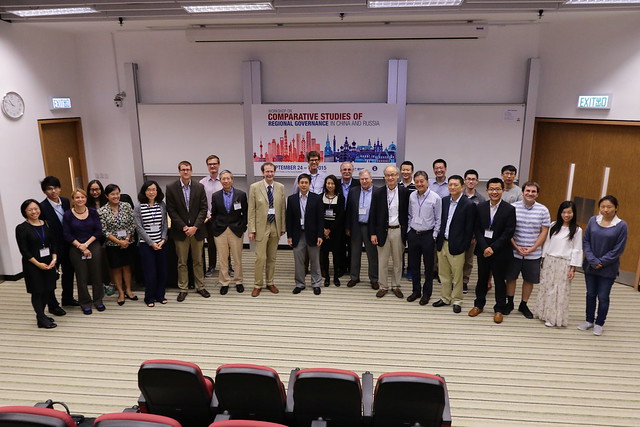 To inquire about the workshop or request related materials, please contact us at iems@ust.hk.