This talk is a part of the HKUST IEMS & IPP – EY Hong Kong Emerging Market Insights Series. It is presented by HKUST IEMS with support by Institute for Public Policy and EY. Find out about past events in the series here.

In his IEMS&IPP-EY Emerging Markets Insights presentation, Richard Freeman (Harvard) asks business leaders if we need to re-examine our ideas of work and income given the impending robotics revolution.

Prof Freeman points out that our worries of being replaced by machines are not new. The Great Depression saw a similar panic sweep the world after the industrial revolution. The 1960s introduced fear of automation-driven job-loss and the dot-com boom also created concern about “The End of Work.”

Yet this wave, according to Freeman, is different. Robots and artificial intelligence (AI) now represent a real challenge to human abilities as it is not clear where our comparative advantages versus machines lie.

China is predicted to account for 39% of the robot market by 2019, but “what will life look like in a world without work?” Prof Freeman believes Bill Gate’s recommendation to simply tax robot-owners is “not feasible, and not desirable either.” Instead, like the advent of land-ownership, the question we need to ask ourselves is “who owns the robots?” He recommends reforms that would give workers greater direct ownership shares in their companies.

Richard Freeman: Work and Income in the Age of AI Robots from HKUST IEMS

Will the next AlphaGo beat you at your job? Will artificial intelligence overwhelm companies that rely on human decision-makers? Or is the concern over robots and automation largely media hype? This talk will offer evidence-driven insights about the on-going and likely future effects of the “robo-lution” on the global economy.

Prof Richard Freeman (Harvard) holds the Herbert Ascherman Chair in Economics at Harvard University. He is Faculty Co-Director of the Labor and Worklife Program at the Harvard Law School, and Senior Research Fellow in Labour Markets at the London School of Economics Centre for Economic Performance. He directs the Sloan Science Engineering Workforce Projects at the National Bureau of Economic Research (NBER), and is Co-Director of the Harvard Center for Green Buildings and Cities. Prof Freeman has made many influential contributions to research in labor economics, including his work arguing "who owns the robots rules the world".

Prof Albert Park is a development and labor economist who is an expert on China’s economic development. He is Director of HKUST IEMS, Chair Professor of Social Science, Professor of Economics, and Senior Fellow of the Jockey Club Institute for Advanced Study at HKUST. His research and commentary has appeared in the Economist, New York Times, Washington Post, Wall Street Journal, BBC, CNN, Bloomberg, Freakonomics, and NPR.

HKUST IEMS is a partner institution of the World Bank's Network for Jobs and Development network. We support research into the challenges of jobs, in order to facilitate the identification and dissemination of best practices and innovations on job creation. Find out more about the Network here. 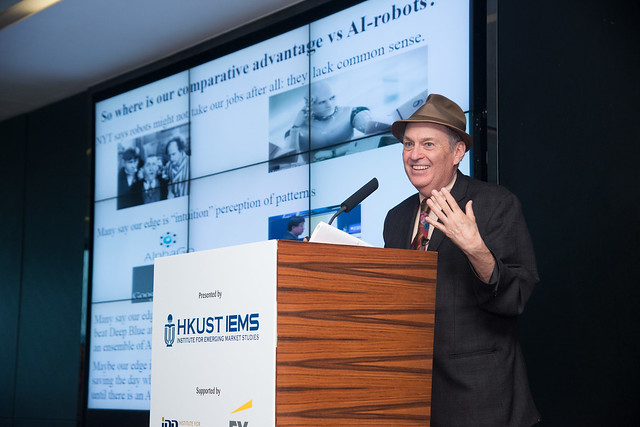 [Event] Can Robots Save Dongguan? Barriers and Incentives to Automation in World's Factory by Huang Yu

[Event] A Routine Transition? Technology, Upskilling, Structural Change and the Evolution of Task Content of Jobs in Central and Eastern Europe by Piotr Lewandowsky (IBS Warsaw)