The unstable geopolitical situation in Ukraine and Russia since early 2014 has led to a butterfly effect of implications for the global economy. Dr. Christopher Hartwell—a leading scholar on Russian affairs and the President of the Center for Social and Economic Research in Warsaw, Poland—expounded on both the history behind and future implications of Russia's recent forays into Ukrainian affairs. Key takeaways included various fiscal and economic consequences for Russia as a result of their incursion into Ukraine, and the possibility of East Asian countries, particularly China, could benefit from Western sanctions against Russia. “Surprisingly, Asia may benefit from the turmoil in the West,” said Dr Hartwell, “Russia is now looking East instead of West.” 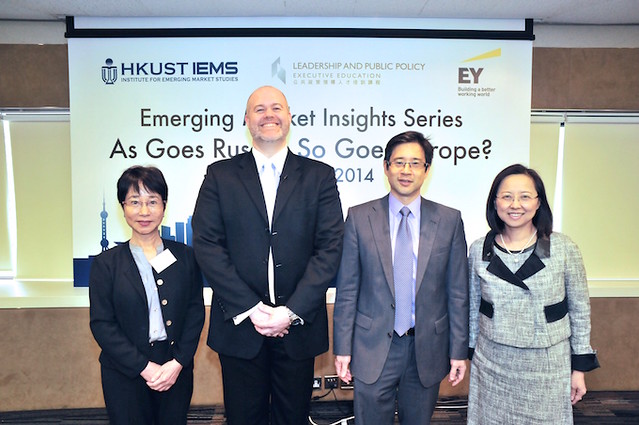 Russia’s invasion of Ukraine will have long-lasting ramifications for the future of Ukraine, as well as the Russian economy, the functioning of Europe, and the entire post-transition global trading order. With the turn in Russian political and economic discourse, what are some of the effects that we might see in Europe? And how might these effects reverberate around the global economy? We will discuss the short-term economic hardship in Russia following the imposition of sanctions and the longer-term drift of Russia away from a laissez-faire, capitalist model to a state-led development paradigm. We will also discuss the various alternatives that Russia has mooted to its participation in a free-trade order, including closer integration with the BRICS and the proposed Eurasian Economic Union. Finally, we will conclude with a look on how this may affect China.

Dr. Christopher A. Hartwell is President of CASE – Center for Social and Economic Research in Warsaw, a Research Professor at Kozminski University, and a leading scholar on the evolution of institutions. Dr. Hartwell’s research concerns transition dynamics, the economics of institutions, and financial sector development. In addition to his academic work, he has advised governments and the private sector on economic policy issues in Armenia, Azerbaijan, Georgia, Kazakhstan, Kyrgyzstan, Moldova, Poland, Croatia, Bosnia, and Kosovo, among others. Dr. Hartwell has also has taught and conducted trainings on macroeconomics and growth issues throughout the CIS and has worked for the World Bank Group and the US Department of the Treasury. Prior to joining CASE, he was Head of Global Markets and Institutional Research at Moscow School of Management – SKOLKOVO Institute for Emerging Market Studies (SIEMS), and he remains a Visiting Fellow with SIEMS. He holds a PhD in Economics from the Warsaw School of Economics and a Master’s in Public Policy from Harvard. He is the author of Institutional Barriers in the Transition to Market: Examining Performance and Divergence in Transition Economies (Palgrave Macmillan, 2013).