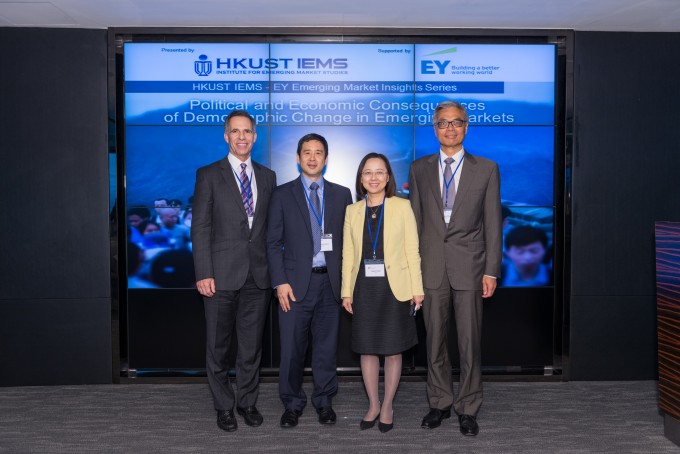 Two leading experts—Prof. Albert Park of the Hong Kong University of Science and Technology, and Prof. Jack Goldstone of George Mason University—examined the political and economic ramifications of the population challenges facing emerging markets such as China, India, Brazil, and North Africa.

For China in particular, its explosion of elderly aged 65 and up are of greatest concern, as this group is forecast to more than double in size from 130 to over 300 million in the next 20 years, comprising over 1/4th of China’s total population. Studies also show that this group is currently not faring well on an economic, physical, or even emotional level: 23% are poor, 38% somewhat handicapped, and 40% suffering from serious depression.

As China continues to rapidly age and simultaneously becomes more educated, Prof. Goldstone suggested that pressures are likely to build for China to shift toward more democratic forms of government. He cited recent studies that reveal a strong correlation between
democratic governance and a country’s median age – that is, the older a country’s population becomes, the more likely it is to become democratic. Hong Kong’s high median age of 42.1 is consistent with its high aspirations for democracy.

The talk was organized by the Institute for Emerging Market Studies (IEMS) at the Hong Kong University of Science and Technology (HKUST) with support from EY.

About Prof. Jack A. Goldstone

Prof. Goldstone (PhD, Harvard University) is the Hazel Professor of Public Policy and a Senior Scholar at the Mercatus Center of George Mason University, and a Fellow at the Woodrow Wilson Center for Scholars. He has won major prizes from the American Sociological Association, the International Studies Association and the Historical Society for his research on revolutions and social change, and has won grants from the MacArthur Foundation, JS Guggenheim Memorial Foundation, the U.S. Institute of Peace, and the National Science Foundation. He led a National Academy of Sciences study of USAID democracy assistance, and has worked with USAID, DIFD, and the US State and Defense Departments on developing their operations in fragile states. Goldstone’s current research focuses on conditions for building democracy and stability in developing nations, the impact of population change on the global economy and international security, and the cultural origins of modern economic growth. Goldstone has authored or edited ten books and published over one hundred articles in books and scholarly journals. His recent essay in ForeignPolicy.com, “The Rise of the TIMBIs” presents a new view of the world economy. His latest books include Why Europe? The Rise of the West 1500-1850 (McGraw-Hill, 2008; Chinese Translation 2010), and Revolutions: A Very Short Introduction (Oxford 2014).

Prof. Goldstone’s blog on current events can be found at www.newpopulationbomb.com.

Prof. Park (PhD, Standford University) juggles several roles: Director of the Institute for Emerging Market Studies, Chair Professor of Social Science, Professor of Economics, and Senior Fellow of HKUST’s Institute for Advanced Study. His international profile includes Research Fellowship of the Center for Economic Policy Research (London), the Institute for the Study of Labor (Germany), and the Human Capital Opportunities Working Group (Chicago). After his PhD at Stanford, he joined the University of Michigan and Oxford University. As a development economist, his specialty is the Chinese economy, having published extensively in leading academic journals on its economics of aging, poverty and inequality, human capital and employment, and firm performance. A co-Principal Investigator for CHARLS, he is a darling of the international media, having written editorially or had his work cited by the Economist, the Wall Street Journal, and the New York Times, also with appearances on Bloomberg and BBC TV among others. See here for more about him.