From 1981 to 2013, per capital GDP growth in Mexico had been less than 1%—a shockingly low growth rate when compared to similar emerging market economies such as China and India. In the HKUST IEMS Public Lecture on 18 November 2014 at the campus, Dr. Manuel Sánchez González, the Vice Governor at the Mexican Central Bank, spoke at length on the modern history of the Mexican economy and addressed the most crucial problem facing the Mexican economy, specifically stagnant total factor productivity growth.

During his presentation, Dr. Sánchez discussed how the Mexican economy suffers from inefficiencies in multiple market sectors, due primarily to poorly functioning institutions, deficient infrastructure, burdensome regulations, and a lack of competition in key market sectors. He then illustrated the inefficiencies in certain key sectors such as energy and telecommunications (which the government had previously monopolized), and discussed Mexico’s current structural reform agenda aimed at making these inefficient market sectors more open to competition and to increased productivity. Moreover, as Mexico enjoy close trade relations with the American economy—which is currently in an upswing—the Mexican Central Bank is optimistic that the overall Mexican economy will continue to grow in the 2015 and 2016, but at a relatively faster rate. He also confided the Mexican Central Bank’s position on fiscal and monetary policy for the coming few years, and reaffirmed that, while the current inflation rate in Mexico is now over 4%, inflation is expected to drop to 3% in late 2014 and 2015.

Available in PDF and HTML. 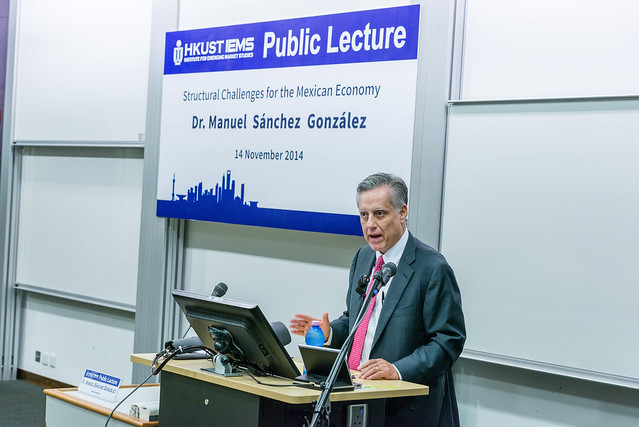 In Mexico, the economic policies implemented in the last few decades have set the stage for the economy’s modernization. The change has yielded many fruits, including an enlarged middle class, greater consumer choice, and higher living standards. Even so, Mexico’s economic growth has not completely lived up to expectations in the recent past. Some of the key obstacles to achieving greater economic expansion center on productivity. Barriers to higher productivity, in turn, follow from limited competition and excessive regulation in key sectors of the economy. Mexico’s current reform agenda seeks to reduce these barriers. Energy and telecoms reforms are particularly important, with these sectors enjoying openness to private participation not seen in generations.

Manuel Sánchez González is a Member of the Governing Board and Vice Governor at the Bank of Mexico, Mexico’s central bank. Prior to this appointment, he was Director of Investment at Valanza México, the private equity unit of BBVA. He joined Bancomer Financial Group, now BBVA Bancomer Financial Group, in 1993 as Director of Financial Analysis and Investor Relations. During 1995-97 he was Director of Planning and Finance at the group’s Service Banking Division. Afterwards and until 2004, he was the group’s Chief Economist. Previously, Sánchez was Director General of the Center for Economic Analysis and Research (CAIE) at the Autonomous Technological Institute of Mexico City (ITAM.)

Dr Sánchez was professor of economics there and has also taught economics at several Mexican and American universities, including Boston College and the University of Chicago. He is the author of numerous articles published in books, professional journals, and magazines. He led research for and was the editor of the book Privatization in Latin America, published in 1993, with contributions by research centers from Chile, Mexico, Colombia, and Argentina. He is the author of the book Economía Mexicana para Desencantados, published in 2006. He has written op-ed articles for several newspapers and a popular column for the Mexican newspaper Reforma. He has been a consultant for several corporations and international institutions. Previous posts include chief economist for Vitro Group and economist for the Industrial Alfa Group, both based in Monterrey, Mexico.

Dr Sánchez holds an M.A. and a Ph.D. in economics from the University of Chicago.