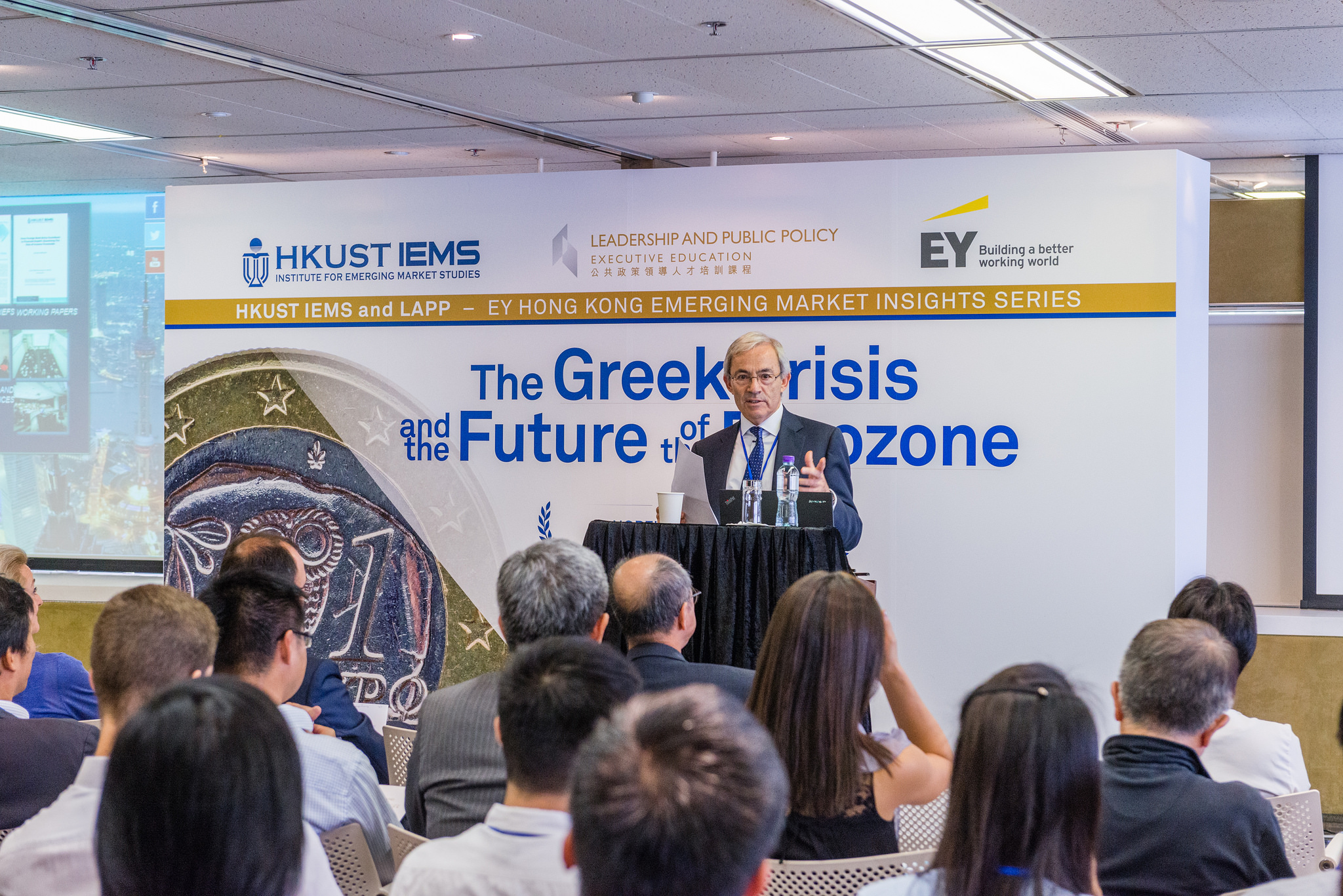 This talk is part of the HKUST IEMS and LAPP – EY Hong Kong Emerging Market Insights Series. It is presented by HKUST IEMS with support by HKUST Leadership and Public Policy Programs (LAPP) and EY. Check out the next event in the series at http://iems.ust.hk/insights.

Sir Christopher Pissarides, Nobel Laureate, Professor of Economics at the London School of Economics, Professor-at-Large at the HKUST Institute for Advanced Studies, and HKUST IEMS Faculty Associate, presented his views on Greece’s recent economic crisis, explaining in detail the causes of the crisis and explaining the country’s strained geopolitical history. The talk was supported by the HKUST Leadership and Public Policy Program (LAPP) and EY Hong Kong.

Sir Christopher stated that one must go back over 50 years to understand the recent Greek economic conundrum. The 1940s were the most destructive period, immediately after German occupation and during the Greek civil war. Once communism was defeated and their supporters exiled, Cyprus was given to Turkey. Western European politicians had little interest in Greece except to see that it became a democracy. Consequently, as a purely political move without regard to Greece’s precarious economic situation at the time, Greece was added to the European Union.

By the time the Euro came along, high inflation and debt made it impossible for Greece to join the Eurozone. Only through the falsification of its debt obligations was Greece able to join, as high inflation and its untenable fiscal situation made such a prospect otherwise impossible. Greece then had access to capital at Germany’s low interest rates and was tempted to borrow increasingly more. Little of this lending went toward the development of local industry or infrastructure, which would have boosted the country’s long-term economic prospects. Instead, most of the added liquidity poured into Greece’s heavily monopolized domestic economy such as its expansive shipping industry.

In 2010, when doubts about Greece’s fiscal strength caught the public’s attention, the country received temporary relief from the European Union, and in 2012 some of its debts were forgiven provided Greece undertake austerity measures.

Although both Greek politicians and international lenders made mistakes, Sir Christopher felt strongly that only solidarity between Greece and the Eurozone can lead to recovery. Unfortunately, the current narrative paints a picture of a Greece whose interests are in direct conflict with the rest of the Eurozone. Proposed austerity measures, such as further cuts to the country’s domestic labor costs, are unlikely to benefit the Greek economy in the long-run.

Sir Christopher was unequivocal that Greece’s best and perhaps only option was to remain in the Eurozone. If Greece were to leave the Eurozone and readopt the Drachma, its original currency, it would have no choice but to default on its Euro-denominated debts, and consequently fail to revitalize its flagging economy.

The Greek crisis has features that should not be new to economists or policy makers. A state within a monetary union, which has a common currency and common monetary policy, has run huge debts which it cannot repay, debts mostly owed to its partners within the Union. What does the country do, and what do the partner countries do?

The peculiarities of the Eurozone and the premature adoption of the monetary union 15 years ago open up a host of issues in relation to this crisis, such as:

The answers to these questions have implications for the future of the Eurozone and the European Union as a whole. In this talk, Sir Christopher will discuss the approach currently pursued by the European Union, and its implication for Greece’s economic revival and future growth.

Prof Sir Christopher Pissarides is the winner of the 2010 Nobel Prize in Economics (co-awarded with Dale Mortensen of Northwestern University and Peter Diamond of MIT for their work in the economics of markets with frictions), Regius Professor of Economics at the London School of Economics, Professor of European Studies at the University of Cyprus, Chairman of the Council of National Economy of the Republic of Cyprus, IAS Helmut & Anna Pao Sohmen Professor-at-Large of the Hong Kong University of Science and Technology, and HKUST IEMS Faculty Associate. He specializes in the economics of labor markets, macroeconomic policy, economic growth, and structural change.

One must go back over 50 years to understand the recent Greek economic conundrum. 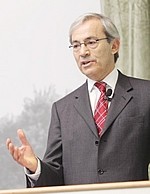