Much has been written about One Belt One Road since Xi Jinping made it his flagship initiative in September 2013. Although there are many interpretations as to the ultimate objectives of the Belt and Road Initiative, there is one that nobody can deny. The Belt and Road Initiative seeks to improve trade connectivity by upgrading transport infrastructure across much of Eurasia. The undertaking spans a massive geographic area covering as many as 63 countries, accounting for sixty percent of world’s population and thirty percent of global GDP.

This massive project is centered on two main routes over land and sea. On land, the focus is on transport and energy infrastructure for the Silk Road Economic Belt (the Belt). By sea, investments in new ports serve as pillars for promoting trade along the Maritime Silk Road (the Road). Both will impact Europe massively. The land route ends up in Europe and the sea route is currently the busiest trade corridor between Europe and China. Heavy investment will ease transportation bottlenecks affecting cross-border trade.

Among the many benefits of improved connectivity, trade is at the forefront. The idea that improved transport infrastructure fosters trade is intuitive, but whether such benefits can be spread across countries – and which countries win or lose the most – depend partly on their distance from the improved infrastructure. We address these questions in our study by estimating how reductions in transport cost are likely to foster trade. Beyond European trade, results show that 10% reductions in railway, air and maritime costs would increase trade by 2 percent, 5.5 percent and 1.1 percent, respectively.

So far, the EU has not needed to finance any Belt and Road infrastructure projects. While the current Initiative is centered on infrastructure, there is another way it may evolve: dismantling trade barriers. In fact, Chinese authorities have begun to consider free trade agreements (FTAs) with Belt and Road countries. The issue is that EU countries have yet to be included. More problematic is that it is only possible for EU countries to collectively strike trade deals with China. This means that the chance for the EU to benefit from FTAs is slim. If the Belt and Road Initiative focused on FTAs, instead of infrastructure, the EU would no longer benefit from a free lunch. It would instead be isolated from a sizable free trade area next to its borders. As one can imagine, this scenario is much less appealing than the previous one focused on infrastructure.

The final scenario is one in which both transport infrastructure is improved and a FTA is agreed upon by Belt and Road countries. This scenario is relatively neutral for the EU, although there are clear winners and losers as our findings will demonstrate. 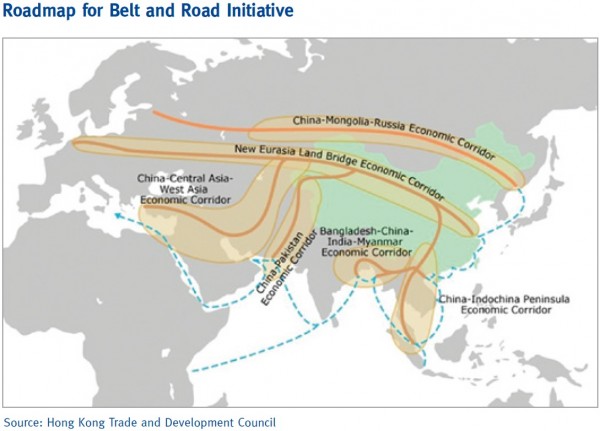 Scenario I: simulating the impact of a reduction in transportation cost on EU trade. From a regional perspective, the EU is the largest winner of the Belt and Road Initiative, with trade rising by more than 6%. Halving the cost of railway transportation is behind the large gains in trade within Europe, particularly for landlocked countries.

Trade in the Asia region is also positively affected by the reduction in transport costs but only half as much as the EU, with trade increasing 3%. Surprisingly, Asian countries are found to be neither top winners nor losers. This can be explained by the fact that estimated reductions in maritime transportation costs are quite moderate.

The rest of the world experiences diversion of trade towards Belt and Road areas, but with only a very slight 0.04% reduction in trade. Our results point to the Silk Road Economic Belt being a win-win for trade creation; gains for the EU and Asia clearly outweigh any losses to the rest of the world.

The rest of the world experiences diversion of trade towards Belt and Road areas, but with only a very slight 0.04% reduction in trade. Our results point to the Silk Road Economic Belt being a win-win for trade creation; gains for the EU and Asia clearly outweigh any losses to the rest of the world.

Scenario II: simulating the impact of an FTA within Belt and Road areas on EU trade. If China established a FTA zone with Belt and Road countries, the EU – previously the biggest winner from the reduction in transport costs – now suffers slightly.

We assume EU members are left out of any Belt and Road trade deal, and that the EU will not sign a trade agreement with China.

Enhanced integration means that China and Belt and Road countries will substitute EU trade with trade among themselves. This is true even for countries within the EU that are formally included in the Belt and Road Initiative, such as Hungary and Poland, as they will not be able to enter any FTAs without the rest of the EU.

The Asia region then becomes the biggest winner, followed by non-EU European countries which also benefit from the elimination of trade tariffs. If we consider countries one by one, the top winners are Middle Eastern and Central and East Asian countries – whose trade increases by more than 15%. This compares favorably with trade gains stemming from the reduction of transport costs – previously estimated for this group of economies to be 3%. 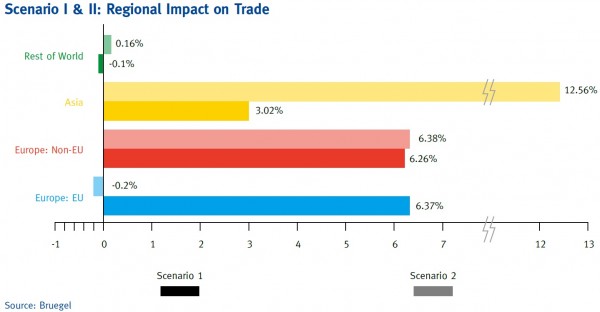 Most Asian countries become the biggest winners since they benefit from both a reduction in transport costs and the elimination of trade tariffs. Some EU countries also benefit significantly, but less so than Asian ones. This is especially the case for landlocked countries such as Slovenia and Hungary. In this way, Germany also benefits more than France or Spain.

This is intuitive because these EU countries benefit from transport cost reductions but are not included in a FTA. Also, as in the previous two scenarios, there are always small losses for countries far from the Belt and Road (the biggest being Japan, while impact on the US and Canada is close to zero.) 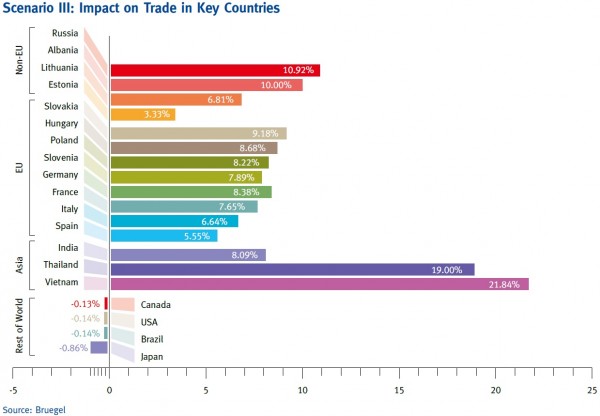 Our findings have special policy implications for the EU. Our analysis suggests that it may be in the EU’s interest to more actively take part in the Belt and Road Initiative.

Xi Jinping’s current vision for One Belt One Road focuses on improving transport infrastructure, and Europe especially benefits. The EU is simply better positioned to take advantage of cheaper rail and maritime transport than Belt and Road countries, at least for now.

So far, the Initiative has been financed by China with Belt and Road countries. The EU clearly benefits from stronger trade links, and without an attached financial cost.

On the other hand, a free trade agreement between China and Belt and Road countries – which leaves out the EU – would hurt EU trade slightly. The negative effects on the EU of a neighboring free-trade area are much smaller than the benefits of improved transport infrastructure.

A potential FTA would benefit Asian countries the most.

Alicia Garcia-Herrero is Chief Economist for Asia Pacific at NATIXIS and a HKUST IEMS Faculty Associate. Alicia has held positions in several central banks, retail banks and NGOs, most notably the IMF. Alicia works with think-tanks such as BRUGEL, Real Instituto El Cano and the Emerging Market Institute at Johnson Graduate School of Management. She is a member of the Council of Advisors of the HK Institute for Monetary Research, an adjunct professor at HKUST and visiting faculty at the China-Europe International Business School.

Jianwei Xu is Associate Professor at Beijing Normal University. His research focuses on international economics and labor economics, specifically on China’s economic transformation and foreign relationships. Jianwei is an affiliate fellow of the China Academy of Social Science and a youth member of the China Finance Forum 40. He is published in academic journals and writes policy articles for Chinese media.

This brief is based on a Bruegel blog article.