Microcredit is widely thought to be a solution to world poverty and a means to empower the poor. Yet in recent years, evidence has emerged suggesting that it may not deliver all the outcomes that have been hoped for (New York Times, 2011). In particular, in a number of settings, households that receive microcredit do not achieve higher consumption or assets (Banerjee et al, 2014).

Why is this? Although there are many versions of the traditional microcredit model, in all versions borrowers self-organise into groups and each member is jointly liable for the loans of all group members. Loan disbursal is sequential. Repayment typically begins one or two weeks/months after disbursal, with weekly/monthly repayment instalments over one year. If any member defaults, the entire group is cut off from all future lending. From the MFI’s financial perspective, microcredit has been successful; borrowers are not required to post collateral and yet they nearly always repay the loan. Many people believe that this high repayment rate is the result of product design: the incentives are such that safe borrowers form groups with other safe borrowers (peer selection), monitor each other’s loan usage (peer monitoring), impose sanctions on those who default, and repay on behalf of defaulting group members (joint liability).

Unfortunately, however, these same features may be shortcomings. The rigid, high-frequency repayment schedules and joint liability can discourage borrowers from investing in risky, yet potentially more profitable, projects (Fischer, 2013), such as diversification into high-value cash crops. Strict repayment rules can create tremendous pressure on borrowers to repay even when they are unable to, and have even been blamed for farmer suicides in some parts of India (Bloomberg NewsWeek, 2010). The joint liability feature can also threaten the viability of MFIs, as seen when a religious organisation’s 2009 ban on followers’ transactions with MFIs led to contagious defaults (Banerjee and Duflo, 2011). The regular group meetings and saving targets also impose costs on borrowers, so that often borrowers with higher opportunity costs of time choose not to participate. 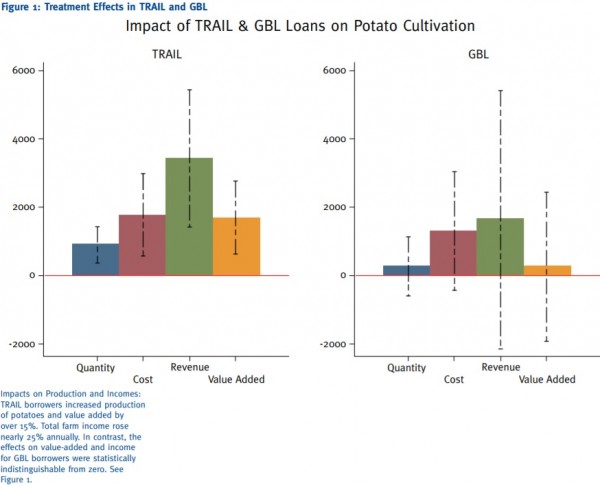 Our project proposes and tests an alternative to traditional microcredit that avoids some of these problems. In our approach, borrowers are liable only for their own loans (individual liability), and therefore group members cannot constrain their project choice. There is also no incentive for contagious default. To ensure that the very poor get the loans, only households owning less than a low threshold of land are eligible to participate. Borrowers do not have to attend group meetings, to monitor other borrowers or be monitored by MFI officials, or meet any savings targets. Most importantly, the scheme is designed to facilitate the financing of agricultural activities: the loan cycles match agricultural cycles, and repayment is due in a single lump sum at the end of a crop cycle. Repayment amounts are adjusted downwards if the entire village faces a negative shock that lowers their revenues significantly below average.

A crucial issue is that of borrower selection. In this approach, joint liability is replaced with an alternative mechanism called Agent Intermediated Lending (AIL). Agriculturalists typically interact with a range of local entities: traders who buy their output, shopkeepers who sell them inputs, and moneylenders who give them credit. These intermediaries have information about a farmer’s ability and willingness to repay, and also have the ability to monitor and influence a farmer’s use of the loan and its subsequent repayment. One such person is appointed in each village to be the MFI’s agent and identify potential borrowers. He earns a commission that depends on repayments made by the borrower, which incentivises him to choose safe borrowers and to ensure that repayment is timely. However, he has no role to play in the actual disbursement and recovery of the loans, so that he is less likely to exploit borrowers.

To examine how such a scheme might work in the real world, we partnered with an MFI to conduct a field experiment in 48 villages in two districts of the potato-growing belt of West Bengal, India. In 24 randomly selected villages each, the MFI implemented the Trader Agent Intermediated Lending (TRAIL) scheme. It appointed one local trader or lender and asked him to recommend a set of borrowers from the village. To a random subset of these recommended households, the MFI advanced starting loans of INR 2,000 (approximately US$40) with a four-month duration, at an annual interest rate of 18%.The starting date for the loans in the first cycle coincided with the planting season for potatoes, the major cash crop in the region, and the maturity dates coincided with the harvest, so that farmers would be able to repay the loan in a single lump sum. Upon full repayment, the borrower became eligible to borrow INR 2,660 (133 percent of 2,000) in the next 4-month cycle, and loan sizes in subsequent cycles became progressively larger. To avoid creating undue pressure to repay, if the average revenue in the village fell by more than 50% of the 3-year average, all repayment amounts were adjusted downward proportionately.

In another 24 villages, the MFI introduced its own, traditional group-based lending (GBL) approach, although these loans were also given for four-month periods with repayment due in a single lump sum.

Our results suggest that TRAIL loans increased the cultivation and output of potatoes, and as a result, increased profits from potatoes by 20 percent. Importantly, farmers were not substituting away from other crops in order to grow more potatoes; instead overall agricultural incomes increased by 25 percent. In contrast, acreage, output and profits from agriculture were unaffected by the GBL loans.

What causes these differential impacts? Our analysis shows that not only did agents recommend individuals who had borrowed from them in the past, but within this group, they tended to recommend the more productive, and therefore safer, borrowers. In contrast, both low and high productivity borrowers participated in the GBL scheme, so that on average TRAIL borrowers were more productive and safer than GBL borrowers. Over six cycles, TRAIL loans were more likely to have been repaid than GBL loans.

The TRAIL scheme was also more costeffective for the MFI, and generated a cost savings of 80-90 percent relative to the costs of administering the GBL scheme. This reduction was due to to the reduced requirements for monitoring, liability and MFI controls. In future work we plan to investigate trade-offs between the agent’s commission rate and cost-effectiveness of the scheme.

There are also important differences in the wealth composition of the borrowers selected into the two schemes. GBL groups were more likely to be formed among landless households, whereas TRAIL borrowers owned on average about 0.45 acres of land. This is consistent with the idea that households with poor alternative opportunities have the greatest incentive to participate in a group-based scheme with frequent meetings and savings targets. Unfortunately however, although the GBL scheme attracted poorer borrowers, it did not improve their incomes. 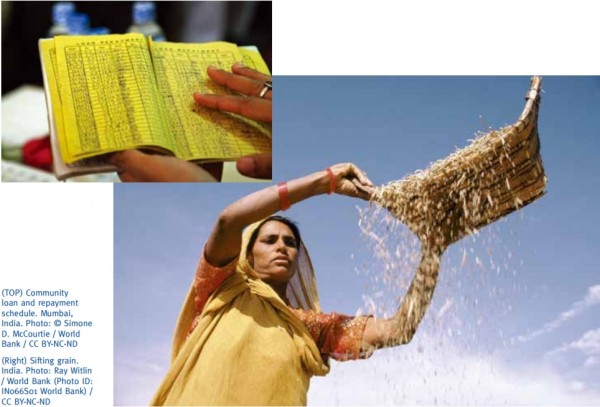 Our results suggest that microcredit products should be designed according to the goal in mind. Although group-based loans are better at targeting the extremely poor, and do help the poor smooth consumption (Islam and Maitra, 2012, Morduch, 1998), they do not appear to increase borrower incomes. In contrast, the AIL approach is more effective at targeting those who can invest the funds productively, earn high returns and possibly escape poverty, ultimately fulfilling the microfinance promise. Just as banks offer different products to suit different consumers, microcredit institutions need to design different products depending on which social goal they are pursuing. Our work gives cause for optimism: it is possible to design microcredit so that it does raise incomes. With careful attention to selection and monitoring mechanisms, and appropriate incentives for agents, the AIL approach could be adapted and replicated in many different parts of the world. The microfinance promise may yet be fulfilled.

Sujata Visaria is Assistant Professor in the Department of Economics at the Hong Kong University of Science and Technology. She has a Ph.D. from Columbia University, and worked at Boston University for four years before coming to HKUST. Her research studies how financial institutions affect micro-level outcomes in developing countries. She has published in the American Economic Journal: Applied Economics, American Economic Review and Econometrica. She is an affiliate of the Bureau for the Research and Economic Analysis of Development (BREAD) and the Small and Medium Enterprise Initiative of Innovations for Poverty Action.

Pushkar Maitra is a Professor of Economics at Monash University, Australia.

Sandip Mitra is an Assistant Professor in the Sampling and Official Statistics Unit at Indian Statistical Institute.

Dilip Mookherjee is a Professor of Economics at Boston University.

Alberto Motta is an Assistant Professor of Economics at the University of New South Wales.