Renminbi Internationalization: The Prospects of China’s Yuan as the Next Global Currency 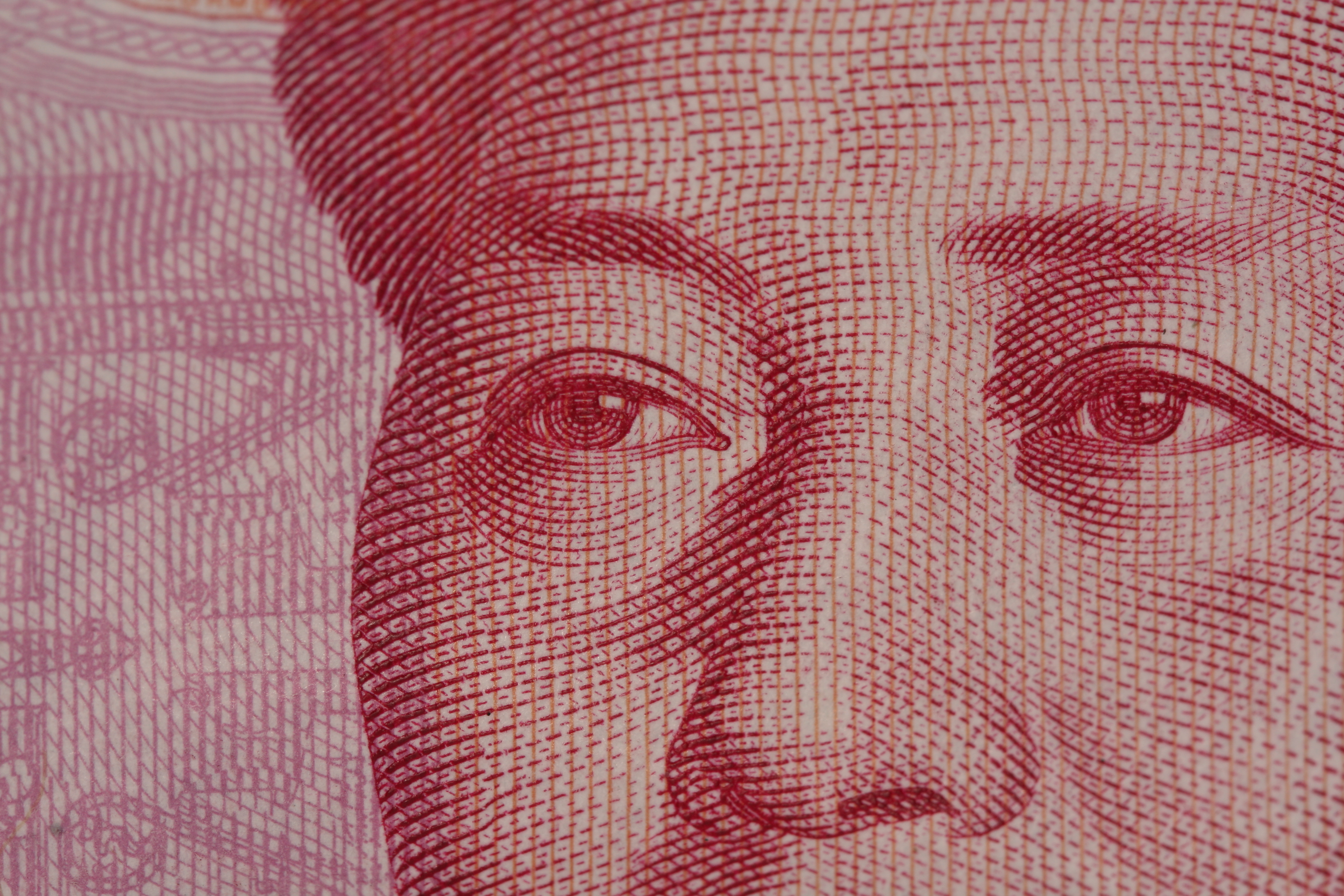 Internationalization of the renminbi (RMB) is China’s long-term strategy aimed at creating a stable international monetary environment for its own economic development. Its goal is for Chinese and non-Chinese alike to use the RMB for trade, lending, borrowing, and investing internationally. One consequence of this is that Chinese citizens can use the RMB to buy and sell goods and services, and to borrow and lend internationally. This can minimize Chinese currency risk in trade and financial transactions and minimize the chance of balance of payment crises occurring in China caused by speculative attacks on the RMB. Developing countries, which usually cannot borrow in their own currency, are vulnerable to such crises, which have been termed “original sin” by Barry Eichengreen. The Asian Financial Crisis of 1998 is a good example of such a crisis, with China unaffected mainly because of its capital controls. However, China is under pressure to liberalize its capital account and allow freer flows of capital as it tries to raise its international influence.

The use of RMB for international transactions is an important measure to resolve the “original sin” issue. Additional benefits of RMB internationalization to China are enhanced political influence, the ability to extract seigniorage (issuing RMB to foreigners in exchange for real goods), and the ability to borrow large amounts from abroad cheaply in China’s own currency.

Under the current international monetary system (IMS), the USD is the dominant invoicing, investment, and reserve currency in the world. The system is highly asymmetric, in the sense that most countries want to maintain a stable exchange rate with the USD by intervening in the foreign exchange market, while the US does not need to worry about the value of its own currency relative to others. For this reason, like many developing countries, China’s RMB was pegged to the USD in the 1980s, 1990s, and 2000s, and nowadays is still closely tracking the USD (though the peg is a “crawling” one). As a result of such pegging, China’s central bank accumulated a huge amount of USD assets (a substantial percentage of 3.8 trillion USD worth of foreign reserves in January 2014 was in USD). Any drastic depreciation of the USD can lead to huge losses to China.

In order to escape from the abovementioned “dollar trap”, China advocates using a super-sovereign currency (Special Drawing Rights, or SDR) as the global reserve currency, with the currencies of major economies (including the RMB) being the constituent currencies, each weighted by its GDP share. In the long run, China wants the currencies of its main trading partners to be pegged to the RMB, while the RMB itself is pegged to this super-sovereign reserve currency. Whether or not the SDR will become a widely accepted reserve currency, China wants the RMB to be one of the major reserve currencies of foreign central banks. To China, although this is going to be a long process, now is a good time to push for reforming the IMF given that people still have a fresh memory of the 2008 global financial crisis, during which the world suffered from a shortage of USD due to the credit crunch, followed by a large depreciation of the USD due to quantitative easing.

However, the RMB is not convertible in the capital account. Thus, establishing offshore RMB markets with the help of government policy is crucial in encouraging the international use of the RMB. In this vein, the Chinese government has taken the following steps: allowing and facilitating RMB to be used to settle trade and denominate offshore financial instruments (e.g. RMB bank deposits, issuing RMB-denominated bonds); supplying foreign countries with RMB liquidity (e.g. signing currency swap agreements with more than twenty foreign central banks); gradually relaxing capital controls; and making the RMB more convertible in the capital account.

The results have been dramatic. They include the increase in RMB bank deposits in overseas centers such as Hong Kong, Singapore, and Taiwan; a surge of RMB-denominated bonds issued and loans extended in various offshore centers, notably Hong Kong (dim sum bonds); a rapid increase in China’s trade settled in RMB (approximately 18% of Chinese trade at the end of 2013); and finally a rapid increase in the foreign exchange turnover of RMB. 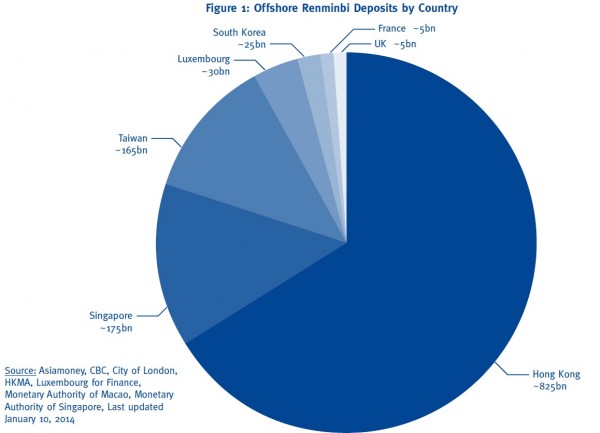 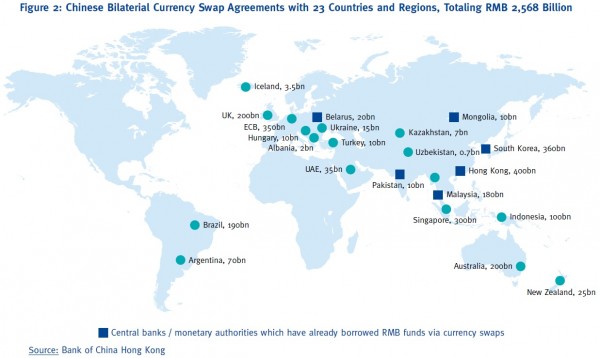 An international currency is one widely used to invoice international trade in goods and services (a unit of account); to settle payments in trade and financial transactions (a medium of exchange); and to denominate financial assets and serve as reserves for foreign central banks (a store of value). These functions are strongly interrelated. Thus, the extent of the use of a currency for any of the above functions would be a good indicator of its use in other functions. Our research attempted to estimate the gap between the potential and actual use of the RMB outside China. Because data about invoicing currencies in trade is readily available, we focus on estimating the gap between the potential and actual use of RMB for trade invoicing. Moreover, as there is a lack of data on RMB invoicing, we analyze the determinants of invoicing shares for some major foreign currencies in order to predict the potential invoicing shares of the RMB.

We carried out two analyses: first, we identified determinants of the invoicing share of a currency (e.g. USD, Euro, GBP, JPY, etc.) in a typical ASEAN country’s bilateral trade with other countries for the years 1993-2011. Because of the availability of data, we used Thailand to represent a typical ASEAN country. Second, we identified the determinants of the Euro’s invoicing share in the bilateral trade between different country-pairs for the years 1998-2010.

Based on the above analyses, we concluded that the determinants of the potential extent of RMB invoicing in a country’s trade with China are: China’s GDP as a percentage of world GDP; trade with China as a percentage of the total trade of a given country; the extent to which a given country’s exchange rate tracks the RMB; the “market thickness” of the RMB, which depends on the degree of convertibility of the RMB; the degree of Chinese capital controls; and the maturity and stability of the Chinese financial system.

We believe the main reasons for the failure of the RMB to realize its potential as an international invoicing currency is its lack of market thickness due to China’s capital controls and the lack of capital account convertibility of RMB; the immaturity of the Chinese financial system; and the persistent use of the USD in the Asia-Pacific region.

China needs to relax its capital controls, allow more convertibility of the RMB, and reform its financial sector much more deeply in order for the offshore RMB market to achieve the required market thickness to become a major invoicing, investment, or even reserve currency in the Asia-Pacific region and beyond. The reason is that a freer flow of funds between onshore and offshore markets and a more mature, broader, and deeper domestic financial market would give incentive for people outside China to use the RMB (or RMB denominated assets) as a unit of account and store of value.

But, with these recommendations come a caveat: Capital controls and full convertibility should be relaxed only after the financial system becomes mature and well-regulated. Otherwise, the unchecked flows of hot money could destablize financial and banking systems, leading to financial crisis. Fundamentally, internationalization of the RMB should be regarded as a consequence of financial development rather than a goal to be pursued independently.

Besides financial market reform such as further marketization and better regulation of the financial market, other measures to increase the credibility of the Chinese government will further enhance the attractiveness of the RMB as a global currency of choice. These include cracking down on corruption and increasing Chinese “soft power”. For most Asia-Pacific countries, China is already their largest trading partner. If the RMB indeed becomes a major currency for trade invoicing, trade settlement, investment, and central bank reserves, their currencies would very likely be increasingly pegged to the RMB. In that case, their trade with China will be less disrupted by the fluctuation of their currency’s exchange rate with the RMB.

Edwin Lai is a Professor in the HKUST Department of Economics. Before joining HKUST in 2009, Edwin Lai was a Senior Research Economist and Adviser at the Federal Reserve Bank of Dallas from August 2007 to June 2009. Before that he was an Assistant Professor at Vanderbilt University, Associate Professor (with tenure) at City University of Hong Kong, and Associate Professor (with tenure) at Singapore Management University. Prof. Lai has been a consultant to the World Bank; a visiting scholar with Boston University, Kobe University, and the University of Munich; a visiting fellow (twice) with Princeton University; and a visiting research fellow with the Hong Kong Institute for Monetary Research. He is a fellow of the CESifo Research Network, and an associate editor of the Review of International Economics. He received his B.Sc. in engineering from the University of Hong Kong, and his Ph.D. in economics from Stanford University. Prof. Lai has published in the American Economic Review, RAND Journal of Economics, International Economic Review, Journal of International Economics, and other respected economics journals.