Seoul Searching: How to Move Beyond the Export-oriented “Asian Development Model" 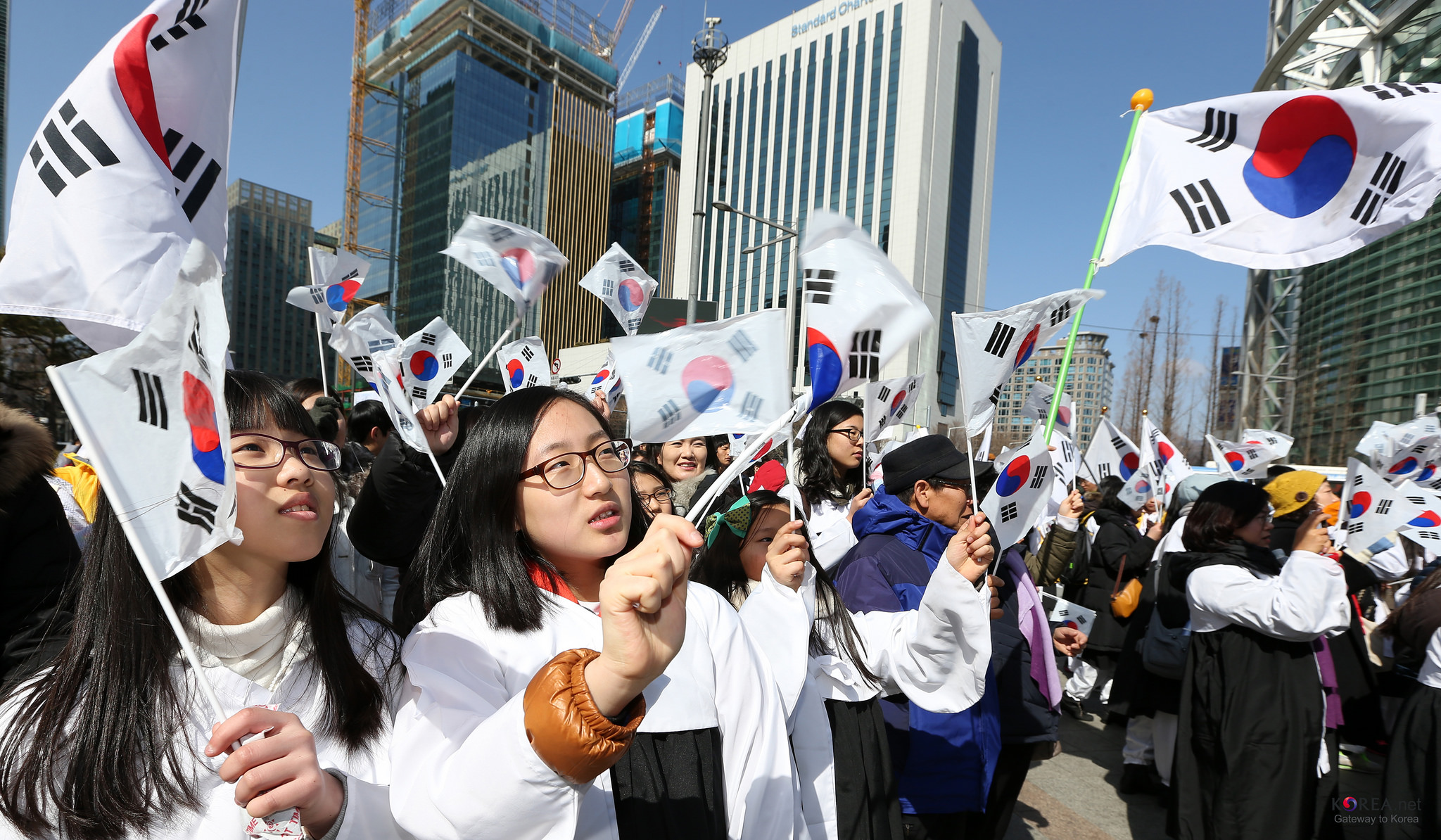 Export-oriented industrialization has transformed the Korean economy so profoundly that it has become known as the “Miracle on the Han”. The Korean economy has weathered the 2008 recession better than most of the developed world. However, this industrial model has become fragile, as the conglomerates known as the chaebol are increasingly being challenged by Chinese competitors. Foreseeing this challenge, Korean policymakers have sought new engines of economic growth in business services and entrepreneurship. Yet, these attempts have either failed or remain to be fully developed. These problems will soon be exacerbated by a demographic shift, as the labor pool will not only shrink but will also become older and presumably less productive. These challenges could constitute a crisis, and how Korean policymakers, executives and civil society leaders respond to them will affect Korea  as strongly over the next fifty years as the developmental state did over the past fifty.

While some parts of the Korean experience were unique, others were shared by other late industrializers in Asia, meaning that Korea’s challenges   are   far   from   unique.   Japan’s economic malaise in the past few decades have largely foreshadowed Korea’s challenges today. Thus, a cure to this malaise in Korea may also work in Japan. While a rising China has yet to face these challenges, China has unmistakably been following in the footsteps of Korea in many respects, and may very well experience some of the same challenges in the future. While key aspects of the Chinese experience, including state ownership and  a massive domestic market, obviously differ from the Korean counterpart, the similarities are just as obvious. Having mastered state- led, export-oriented industrialization, the Chinese are now starting to ask where it should go afterwards, much as Korea started asking the same questions in the 2000s.

Korea achieved growth through export- oriented industrialization, where the state orchestrated Korea’s move into textiles in the 1960s, heavy and chemical industries (e.g. steel, shipbuilding and chemicals) in the 1970s and electronics in the 1980s. In each of these sectors, the state selected national champions (i.e. the chaebol) and funneled technology and capital into these firms. Through these efforts, the chaebol emerged as key actors in global markets, driving exports and economic growth; in 2016, Korea had the seventh-largest number of companies in the Fortune Global 500.

Despite their success to date, the chaebol now face existential challenges. As firms in a rising China have upgraded their industrial competitiveness, Korean firms have lost ground in industries that they dominated not long ago. What is particularly problematic is that Chinese firms have closely benchmarked the Korean strategies, processes, and technologies that had allowed the chaebol to succeed in these industries. Steel exemplifies this trend. Much as POSCO (a South Korean steel making company) once benchmarked Nippon Steel, Hebei Steel and Baosteel in China benchmarked POSCO and Nippon Steel. These Chinese firms started with import substitution, largely replacing Korean imports in the Chinese domestic market. In recent years, however, they have flooded global markets with low-cost steel. In 2014, Chinese steelmakers increased their global exports 63% and even captured nearly 40% of the Korean domestic market.

Even in industries where Chinese firms are not yet challenging chaebol dominance, they are creating strategic problems. Operating at low or even negative margins, Chinese competitors have disrupted the smartphone industry by exerting downward pressure on prices that have eroded profits across the industry. As Samsung slashed prices on mid-range smartphones to compete against lower-cost Chinese phones, the profit margin for its mobile division declined to 10.6% in the second quarter of 2015 from 15.5% in the second quarter of 2014. In semiconductors, Samsung Electronics and SK Hynix retain technological advantages and scale economies over Chinese competitors. Yet, their ongoing reliance on the Chinese market, which spent more on semiconductor imports than petroleum imports across recent years, is a strategic vulnerability. The Chinese will invest 161 billion USD on semiconductors (R&D and manufacturing) over the next few years, and will likely generate scale economies beyond what Samsung and SK Hynix can match. Overall, these competitive threats confirm Korean fears that their current industrial model is becoming unviable, and that “…an attempt to compete with China on cost or scale is bound to fail”. Recognizing the reality of these fears, the Economist described the Korean economy as “a tiger in winter” and “a once fearsome economy”.

Foreseeing this challenge, Korean policymakers have proactively sought new engines of economic growth in business services and entrepreneurship. Yet, attempts to move into business services have either failed or fizzled, and the entrepreneurial push remains at an early stage of development. These problems will be exacerbated by a demographic shift. After decades of economic development, sex selection and gender inequality, Korea today has one of the lowest birthrates in the world. The effects of this demographic change will soon hit the Korean economy, as the labor pool will begin shrinking, and become older and presumably less productive.

Proportion of individuals aged 65 and over for South Korea versus other developed countries. Adapted from Figure 2 in Howe, Jackson and Nakashima (2007).

The challenges confronting Korea are the legacies of policy and strategy decisions made during rapid industrialization. The Korean developmental state had great success mobilizing its initially meager resources to increase its exports. Prioritzing the capabilties needed for export-oriented industrialization, however, meant that the developmental state and the chaebol had to de-prioritize other capabilities that were not immediately needed. This approach had the unintended effect of stunting SMEs and limiting their capabilities, as available capital and opportunities were systematically funneled to the chaebol. Thus, SMEs remained dependent on state support, and most exported only to the extent that they supplied intermediate components for the chaebol.

In the realm of business strategy, a fast-follower approach was necessary and effective for the chaebol, which were late entrants into markets with incumbent players. The   unintended   consequence of this approach, however, was that the chaebol imprinted on this strategy and the operational characteristics implemented to support it, limiting bottom-up creativity and initiative. These characteristics have become problematic in an increasingly uncertain world where innovation has become crucial to success, leaving them  vulnerable both to imitation from well-financed Chinese competitors and disruption from innovative Silicon Valley startups. It is important for Korea to focus on policies intended to remedy the historical underdevelopment of the SME sector, and for the SMEs themselves to adopt strategic innovations and build their own operational capabilities instead of relying on state support. 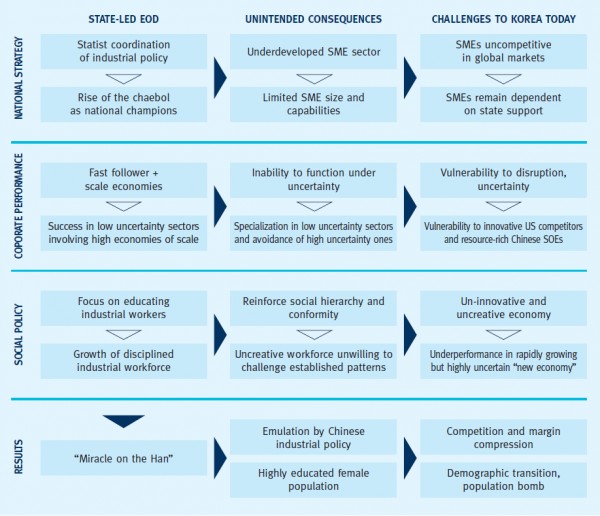 Policy innovations by the state, and strategy and operational innovations by SMEs and the chaebol have the potential to move Korea beyond  the  substantial  challenges it is currently facing. Yet, these innovations cannot be implemented without building dynamic capabilities related to creativity and absorptive capacity. Social change is needed to support the strategic and operational transformation of the chaebol and SMEs, starting with a strengthened appreciation for the gender, national and ethnic diversity emerging within the Korean workplace today. If properly leveraged, diversity has the potential to reduce the groupthink that hampers the creativity, innovativeness and responsiveness of Korean firms today, as well as facilitating greater success in overseas markets. Indeed, Korean firms are already starting to leverage such benefits, and have

learned to appreciate its growing diversity to generate the capabilities needed for firm- level innovations. For instance, the chaebol recognized the strategic value of social and cultural capital of ethnic Koreans living in China and leveraged them to enter and succeed within the domestic market. The Korean-Chinese have played a crucial role in bridging Korean firms and the Chinese host environment, helping the chaebol navigate relationships with government officials and other culturally specific hurdles. Maintaining and nurturing these social trends is of economic importance if Korea  is to overcome the constraints imposed by the legacy of a developmental state, in favor of creativity and the autonomous decision- making capabilities that are important in the new economy.

Joon Nak Choi is Adjunct Assistant Professor at the School of Business and Management and Faculty Associate at the Institute for Emerging Market Studies at  the Hong Kong University of Science and Technology (HKUST). He has previously held appointments at the Shorenstein Asia-Pacific Research Center at Stanford University as Visiting Assistant Professor and Koret Fellow (2016) and as William J. Perry Postdoctoral Fellow (2010-2016), Visiting Assistant Professor of the Practice of Economics at NYU Shanghai (2018), and has worked in the private sector as a management consultant and entrepreneur. His recent volumes, Global Talent: Skilled Labor as Social Capital in Korea (2015, Stanford University Press) and Strategic, Policy, and Social Innovation for a Post-Industrial Korea: Beyond the Miracle (2018, Routledge), link institutions, culture, and networks to corporate strategy and innovation. His editorials have been published in some of the most widely read newspapers in Asia, including the South China Morning Post and the Maeil Kyungjae Daily.