Inequality in wages and employment outcomes has grown significantly in urban China, coinciding with the timing of urban enterprise reforms and labor market reforms in the 1990’s.

Before these reforms, wage and employment inequality in urban China was low. Virtually all urban enterprises were state- or collective-owned and provided the bulk of urban employment. Moreover, the labor market was centrally regulated, making it difficult to fire unproductive workers.

But with the onset of the urban reforms, inequality, and gender inequality, increased. Figure 1 shows the increase in the gap between the male and female urban employment rate, defined as the employment share of male and female working-age populations. The increase in this gender inequality begins around 1997 with a conscious privatization strategy called “Holding on to the Large, Letting go of the Small” (Zhuada, fangxiao). At the same time, labor markets were allowed to become more decentralized. A 1997 initiative called “xia gang” freed SOEs from providing to employees in-kind benefits, such as housing, medical care, and pensions, and firms were given more autonomy and discretion in setting earnings and bonuses, recruitment, layoffs, and promotions.

Is this growing gender inequality a problem and, if so, how should policies be targeted? This question is important for policymakers, as many different processes may be at work, and different processes suggest different policy responses. Certain processes of inequality, such as unfair gender discrimination in the labor force, clearly hurt society, and should be remedied with policy tools, while other mechanisms, such as individuals setting up unequal compensation structures to maximize productivity, do not merit interference. Unfortunately, the existing literature on China’s growing urban gender inequality is inconclusive, finding only that “unobservable skills” are playing a larger role in both overall male wage inequality and gender inequality. In addition, the wider literature on the evolution of gender inequality in transition economies is inconclusive; in some transition economies, gender gaps in employment increased, while in others, they decreased.

The effect of privatization is analyzed with the theory of “ownership-specific” human capital in mind. This theory hypothesizes that there are certain subpopulations that possess relatively more skills that are specific to different types of ownership (i.e. relevant for state ownership vs. private ownership). To what extent is increasing nonemployment concentrated in those populations who have skills that are much more specific to state-owned industry environments? Hence this research analyzes the effects of these reforms on different subpopulations to gain more understanding about labor supply and the stock of human capital in different subpopulations which can inform policymaking.

This research also adds to the sparse literature analyzing the evolution of gender inequality in transition economies. 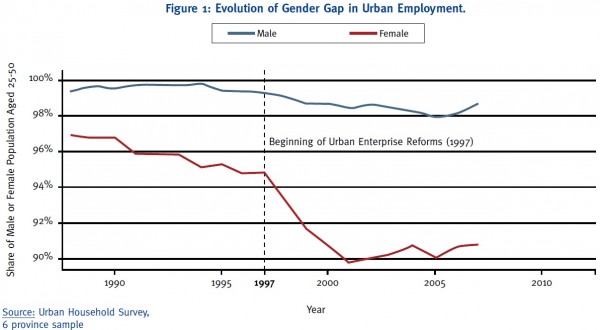 We hypothesize that this female-biased “privatization” contributed to the increasing gender inequality of employment among the sample of urban hukou, non-migrant individuals. This is because we think of privatization as a negative shock to labor demand in the local labor market; privatization would introduce incentives to find lower-cost workers and more efficient workers. Given that labor mobility increased dramatically as rural individuals migrated to urban areas, these migrants provided downward pressure on wages and employment because of direct labor market competition or because of opening to private sector competitors. We also hypothesize that the effects of privatization (and employment growth) are different for different subpopulations.

We use a simple multivariate regression specification to analyze the causal effect of privatization on the change in the gender gap in urban employment. The unit of analysis is the prefectural city unit, and the period of interest is 1990 to 2000.

The independent variables of interest that we construct are proxies for the magnitude and gender composition of privatization, and proxies for male and female local employment growth. Further details for how these proxies are calculated can be found in the referenced working paper. We include a proxy for male and female local employment growth because of the fact that privatization was accompanied by strong economic growth.

The control variables in our main specification include the change in the average years of education, migrant share of the population, child and aged adult dependency ratio, married share, and ethnic minority share. Our study utilizes samples of data from the China Population Censuses in 1990, 2000, and 2005. The sample used in the analysis consists of urban hukou individuals who have never migrated from their county of birth. 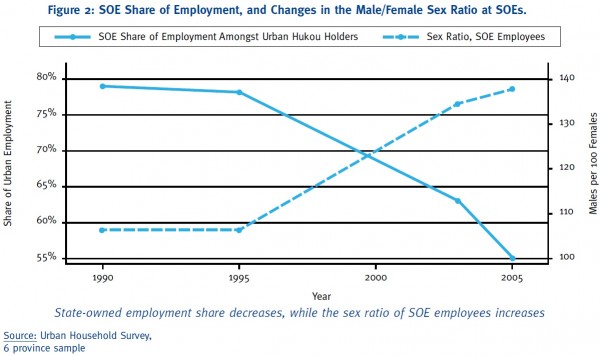 Secondly, this effect is concentrated in subpopulations consistent with the theory of “ownership-specific human capital.” This theory predicts that the effect of privatization, controlling for gender composition and other controls, should be roughly equal. Further, female-biased privatization should affect females more than males. The results of the analysis confirm these predictions.

This theory also predicts that those with relatively more ownership-specific human capital are more affected by privatization. These are likely to be older populations with greater experience in a state-owned bureaucracy, and the less educated. The results are consistent with these predictions, showing that older females, particularly less educated females, were most affected by privatization.

Thirdly, estimates for the employment growth measures are consistent with predictions of the theory of “industry-specific human capital.” The estimates show that young males are most responsive to employment growth shocks, along with young females, older females, and less skilled females.

Lastly, we note that males are more responsive to employment growth than females, and females are more responsive to the negative employment shocks of privatization. This can be explained by gender differences in labor supply. Specifically, it may be that males, perhaps due to social or cultural norms, are more willing to accept lower wages to be employed relative to females, so that male employment rates do not respond as much to negative labor demand shocks (privatization) and respond more to positive labor demand shocks (economic growth).

Another explanation is that females possess relatively more skills suited to state-owned firms in state-protected industries, while males possess relatively more skills suited to the private sector. These ownership-specific skills could be a component of the “unobserved skills” given as the reason for increased employment gender inequality in previous literature.

We note that our findings do not rule out the presence of gender discrimination in the labor market. Perhaps there are no gender differences in labor supply, but female-biased privatization disproportionately laid off females, and growing industries prefer to hire males relative to females. A further analysis on wages can shed more light on whether the differences are due to a labor supply or labor demand explanation.

Because these results suggest that a substantial portion of the increase in the gender gap in employment can be attributed to female-biased privatization interacting with potential gender differences in labor supply, we caution against quota-based policies that attempt to decrease the gender gap in employment. Policymakers should focus instead on the fact that state-protected industries disproportionately employ men, and the fact that the disappearance of childcare and education benefits restricted female labor supply.

Secondly, these results have implications for a resource-constrained government interested in targeting programs to certain subpopulations. For example, unemployment insurance or other means of social welfare trying to protect the labor force from negative labor demand shocks induced by privatization or recession should be targeted to those with relatively more ownership-specific and industry-specific human capital. This would mean targeting the less-educated (lower skill) workers, female workers, and older workers.

Another policy implication is that the government can focus skill training programs on those with less ability or less incentive to learn new skills in a changing ownership or industry environment. For an economy transitioning from centralized planning to a more decentralized market environment, the government could target education and job training programs to the less-educated (lower skill) workers, female workers, and older workers. Or for an economy undergoing a general recession, the government can focus on lowering the barriers to entry for relevant industry training, whether through subsidized or free programs in targeted industries.

Dr. Christina Jenq is a Postdoctoral Fellow at the Institute of Emerging Market Studies and the Institute of Advanced Study. She received her Ph.D. in Economics from the University of Chicago Booth School of Business. Her research interests include Family Economics, Gender, and the Chinese Economy.