People can help protect the environment and reduce energy usage by adopting a green lifestyle. For instance, if U.S. consumers used 10% fewer plastic shopping bags, they could save 10 billion plastic bags, equivalent to saving the amount of petroleum that could drive a fleet of nearly 3000 cars around the earth (Wall Street Journal 2008). If Chinese consumers stopped using disposable chopsticks for just one day, about 56,000 trees could be spared, equivalent to a stand that would cover 100 American football fields (Los Angeles Times 2010). If 5% of New Yorkers decided to commute by bicycle instead of by car, they would reduce carbon dioxide emissions by about 150 million pounds each year (Transportation Alternatives 2008).

A green lifestyle is an acquired pattern of behavior that attempts to reduce negative environmental consequences. In this Brief, we report on recent research on a specific green lifestyle: carrying one’s own shopping bags instead of buying plastic bags. To encourage consumers to use fewer plastic shopping bags, firms, media, and governments leverage various marketing and economic tools such as free gifts of green bags, green publicity, and imposing a plastic bag fee. For example, many stores occasionally give away free green bags and offer rebates for shoppers who bring their own bags. The plastic bag fee has become legally mandatory in many countries such as China, India, Mexico, etc (see Appendix). While efforts to reduce the use of plastic are on the rise, the effectiveness of these efforts is not clear. In fact, recent years have witnessed heated debates on the effectiveness of bag fees and other marketing tools. For example, a major concern is that plastic bag fees might not be effective in reducing plastic bag use, but just impose additional financial burdens on consumers (Washington Post 2013). While adopting a green lifestyle continues to gain favor around the world, researchers and practitioners have only a limited understanding about how people adopt such a lifestyle. 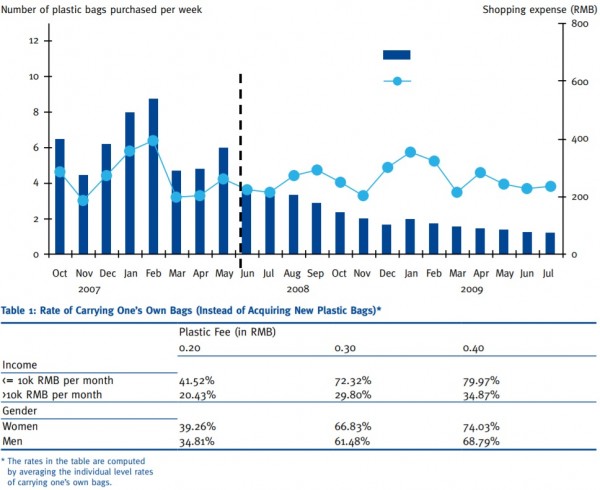 On June 1, 2008, China instituted a nationwide regulation prohibiting the distribution of free plastic shopping bags. Instead, consumers had to pay a small fee at checkout (New York Times 2008). The policy was intended to change the shopping style of consumers who had long been accustomed to receiving free plastic bags. We use data from several sources: 1) a dataset of individual level bag purchases at a large supermarket, from eight months before the implementation of the plastic regulation to fourteen months after it went into effect; 2) a combination of in-store observation and survey data; and 3) a time series dataset of publicity including a total of 475 news articles from local press, television and radio broadcasts, and the Internet. Before the regulation, the plastic bag was free. After the regulation took effect, the price (i.e., the fee) of the plastic bag was initially 0.20 RMB, but eventually increased to 0.30 RMB and later to 0.40 RMB during the data period. We examine the impact of plastic bag fee and various marketing tools on the reduction in the use of plastic. The highlights of the research findings are as follows:

A plastic bag fee sharply reduces plastic consumption. As shown in Figure 1, plastic consumption gradually decreased over time following the regulation. Within six months of implementation, plastic bag consumption was reduced by approximately 47%. Table 1 shows that the observed rate of carrying one’s own bag (vs. consuming new plastic bags) increases as the plastic fee increases. Our analyses further show that a 0.40 RMB fee on plastic bags reduces plastic bag use by about 21% more than a 0.20 RMB fee over a period of 60 weeks. More importantly, after shoppers establish the green habit, they tend to maintain it even when the fee is no longer in effect. Our simulation analyses show that under a 0.20 RMB fee, the rate of carrying one’s own bags goes from about 24% to 64% in the first 60 weeks, and when the fee is no longer imposed, this rate decreases only by about 9% in the following 60 weeks.

People forget to carry their own bags even if they intend to be green. We find that shoppers forget, with 59% probability, to carry their own bags during the first week after the regulation, and the probability of forgetting decreases and stabilizes at about 30% after the twenty-fifth week. Mobile text messaging techniques are found to be effective in reminding consumers to adopt a green lifestyle. We compare the effectiveness of two mobile text messaging strategies: reminding 60% of consumers during the first 10 weeks after the regulation vs. reminding 20% of consumers during the first 30 weeks. As shown in Figure 2, we find that both strategies result in a faster takeoff of the green habit than the baseline case where consumers receive no reminders. Still, using the former strategy results in a greater plastic reduction than employing the latter one (about 22% vs. 14%). It is not surprising that reminding consumers significantly reduces the use of plastic bags, as it helps consumers overcome memory limitations. 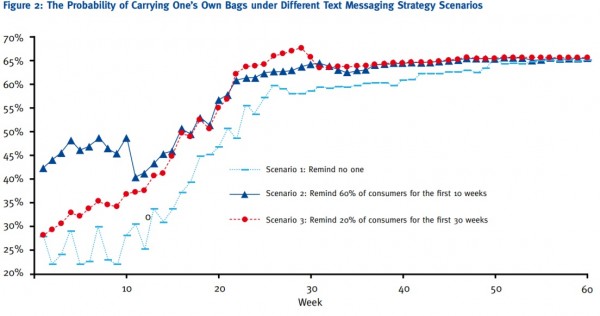 Legislation. Plastic bag fee works, and it works even better in a tough economy!

There are two main issues under debate in plastic legislation: whether charging consumers a plastic fee will effectively reduce plastic consumption, and whether or not it will overburden consumers financially in a tough economy. We find that a plastic bag fee– even of a small amount–can sharply reduce plastic bag consumption, and that low-income consumers are more sensitive to the plastic fee than high-income consumers. Our results suggest that while a tough economy may lower the disposable income of consumers, the resulting budget sensitivity is likely to motivate them to carry their own bags to avoid a plastic fee. Consequently this may lead to an overall larger plastic reduction and faster adoption of the green habit. Contrary to the concern about financial overburden, the accelerated adoption of the green habit by low-income consumers due to their sensitivity to the plastic bag fee can actually lower the total expenses otherwise incurred by such a fee (Wang and Chen 2014, p. 22). Some lawmakers propose a plastic bag fee that starts low but increases over time. Contrary to this idea, our findings suggest that, even if a plastic fee were instituted and then revoked, shoppers would tend to remain green once the green habit is established. Therefore, it is not necessary to motivate consumers by further increasing the fee.

Legislation efforts such as a plastic bag fee use economic incentives to motivate consumers to adopt a green lifestyle. However, consumers may be susceptible to weaknesses of human nature like forgetting. Green marketing should target people who are in the very early period adopting of a green lifestyle, rather than those who have already established a green habit. 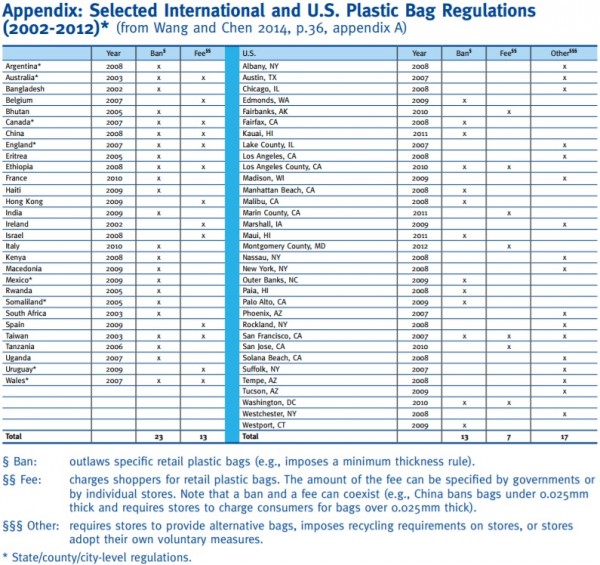 Wenbo Wang is Assistant Professor of Marketing at the Hong Kong University of Science and Technology. He earned his Ph.D. degree from New York University. Professor Wang’s research interests include pro-social behavior, advertising, pricing, digital marketing. He is also is interested in big data and emerging market research. His published his research at top academic journals such as Journal of Consumer Research as well as practitioner media such as Knowledge@Wharton. Professor Wang won the 2013 Early Career Award from the Hong Kong Research Grants Council for his research on TV commercials.