The series of crises in emerging and developing economies (EMDEs) during the 1990s spanning Latin America to Asia provided a major impetus for crisis-hit countries to open their domestic markets to foreign banks, mainly to recapitalize their beleaguered banking systems. Despite variations in the degree and scope of their involvement across regions and countries, foreign bank presence has grown significantly across the board in the EMDEs. One often-used yardstick to measure the extent of foreign bank presence in a country is to look at their share of assets in the domestic banking system. The latest available data indicates that in EMDEs this share has doubled from 22 per cent to 44 per cent between 1995 and 2009 (Figure 1). Allowing foreign banks into a host economy could generate a variety of benefits. Figure 2 provides a snapshot of the literature on foreign bank entry and the implications for host economies. This brief highlights some of these implications based on new research. 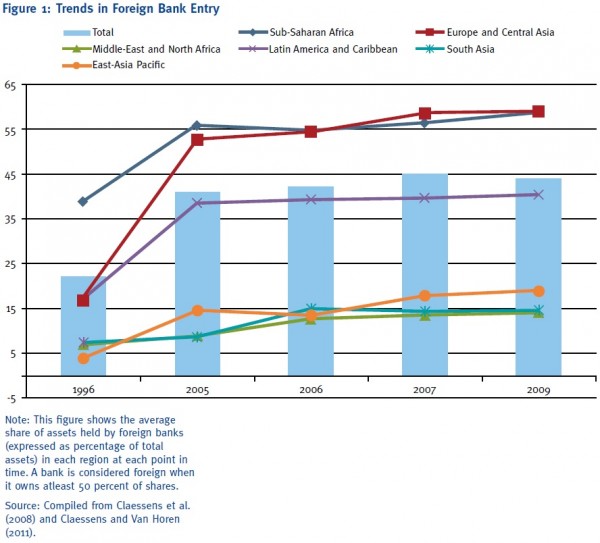 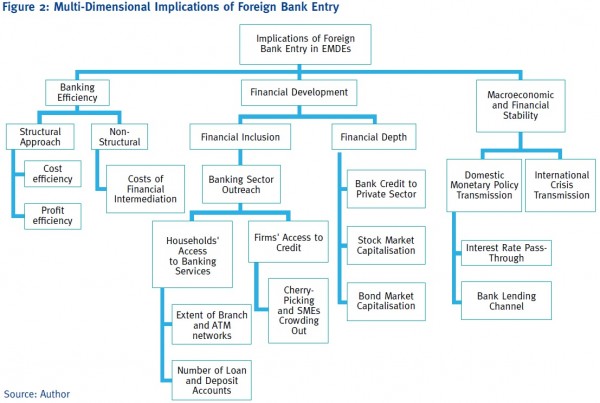 Several studies document evidence of greater efficiency gains to the domestic banking system in the host countries, particularly in the context of EMDEs. A voluminous body of research points out how foreign banks generate efficiency gains by facilitating a reduction in cost structures; improvements in operational efficiency; and the introduction and application of new technologies and banking products. In relation to this, foreign banks could enhance the quality of human capital in the domestic banking system by importing high-skilled personnel to work in the local host subsidiary as well as via knowledge spillovers to local employees which may in turn benefit customers through access to new financial services. Foreign banks generally not only operate with lower overhead costs and charge lower spreads compared to domestic banks but also help promote bank competition by pressuring other banks to lower their costs and their spreads, which have led to overall improvements in the banking system efficiency.

Another important theme in the foreign bank literature is its impact on macroeconomic volatility and financial stability. Foreign banks could be a vital source of stability during periods of local stress since in theory they have the ability to raise the required funds from their head offices in their parent country. They could also serve as a potential transmission mechanism of external shocks which increases instability in the host country. Previous studies suggest that there are two key aspects of foreign banks' lending behaviour. The first is whether foreign banks act as stabilising forces or shock transmitters (in terms of their credit supply) during episodes of global/external policy shocks. The second pertains to how they affect monetary policy transmission in the host country in the face of domestic monetary policy shocks.

On the one hand, there is evidence that foreign banks may be somewhat “fickle lenders”, owing to their better access to alternative business opportunities than domestic banks. This could lead them to import shocks from their home countries, destabilising domestic banking systems. On the other hand, others find that foreign banks can serve as a buffer in the case of negative shocks, because of their diversified liquidity sources. It is also pertinent to recall that several foreign banks enabled faster recapitalisation of domestic banking systems after crises, as was evident for several countries in Asia and Latin America.

While the consensus that emerges from the literature focussing on the implications of foreign bank lending during the global financial crisis (GFC) is that foreign banks seem to promote instability through rapid cut backs in their lending relative to domestic banks, there is an important difference between the GFC and previous crises that needs to be borne in mind. The epicenter of the GFC was in the advanced economies where foreign banks are headquartered while previous crises originated in EMDEs which is why the impact of parent funding shocks on lending by affiliates has come under scrutiny (Van Horen, 2013). However, overall most studies find a positive impact of foreign banks on financial stability, as they have exhibited more consistency in lending during most EME crises. Further, foreign banks which are of the brick and mortar type appear to have been more committed than the others that entered new markets through mergers and acquisitions or other modes (De Haas and Van Horen, 2013) which underlines the importance of mode of entry for financial stability.

First, the significant and positive association between foreign bank entry and financial depth provides a strong case for policy makers to design policies to promote foreign bank entry. Such policies, if implemented in a controlled manner, will likely help them achieve greater financial development, thereby leading to positive growth outcomes. However, there appears to be an inverse U-shaped relationship in the way that foreign banks affect financial depth. This implies that the marginal effects of foreign bank entry tend to fall as countries grow richer, implying that a one-size-fits-all approach to financial liberalisation is likely to be counter-productive.

Second, foreign banks help ease supply-side constraints such as the inability to provide physical access points for delivery of financial services in host economies, which in turn helps promote financial inclusion. However, an important caveat to keep in mind is that the positive impact of foreign bank entry tends to reverse when we observe greater banking concentration in an economy. Concentration enables a few large players to generate monopoly rents by holding on to information endowments and aggravating problems of information asymmetry that in turn deter new entry into the market. Hence, the role of policy makers in EMDEs is not just to provide a better information environment to solidify welfare gains from foreign bank entry, but also to ensure that the domestic market is not dominated by a few large banks.

Finally, recent research also finds that greater foreign bank entry could contribute to the strengthening of interest rate transmission in EMDEs. Similar to the case of financial inclusion, there is a qualification to this result. If higher foreign bank entry tends to be followed by higher levels of banking concentration, the resulting market structure may lead to weakening the interest rate transmission as foreign banks may not pass on changes in policy rates to lending/deposit rates in order to engage in profiteering.

To conclude, as EMDEs continue to liberalise their bank-based financial systems, foreign banks can be expected to play systemically more important roles. In this context, there is an urgent and ongoing need for countries to assess the cost-benefit tradeoffs of foreign bank entry and design appropriate policies to maximise the net gains while minimising the risks associated with this form of financial liberalisation.

Sasidaran Gopalan received his PhD in Public Policy in August 2014 from the School of Policy, Government and International Affairs (SPGIA) at George Mason University (GMU), USA. His fields of specialization are international finance and development, with a specific emphasis on emerging market economies. His dissertation examined the monetary and financial dimensions of foreign bank entry in emerging and developing economies. He obtained his MSc in Economics from Madras School of Economics (Chennai, India) in 2007 and BA in Economics from Loyola College (Chennai, India) in 2005.

Prior to his PhD, he spent a year as a Research Associate at the Indian Institute of Management Bangalore (IIMB) (2007-08) working on various policy issues related to trade in services in Asia. After his stint at IIMB, he moved to the Institute of South Asian Studies (ISAS) at the National University of Singapore (NUS) for two years (2008-2010) where he undertook research on international economic policy issues concerning Asia.

He has co-authored a book published by Oxford University Press (India) entitled “Crisis, Capital Flows and FDI in Emerging Asia” and has published several academic articles in refereed national and international journals, as well as contributed to book chapters in edited volumes along with various op-eds.

His current research focuses on the various implications of financial openness and capital flows on financial development and integration in emerging Asia. 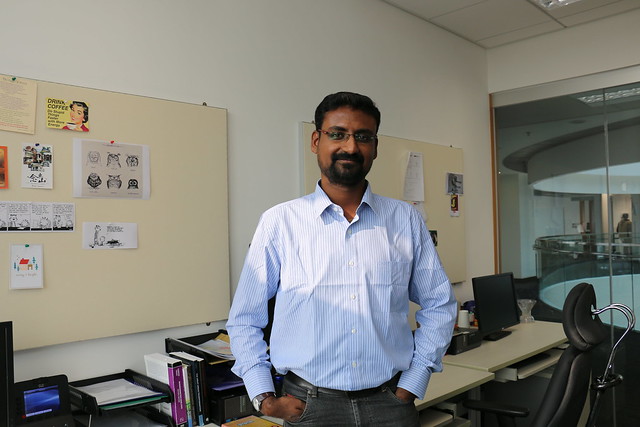