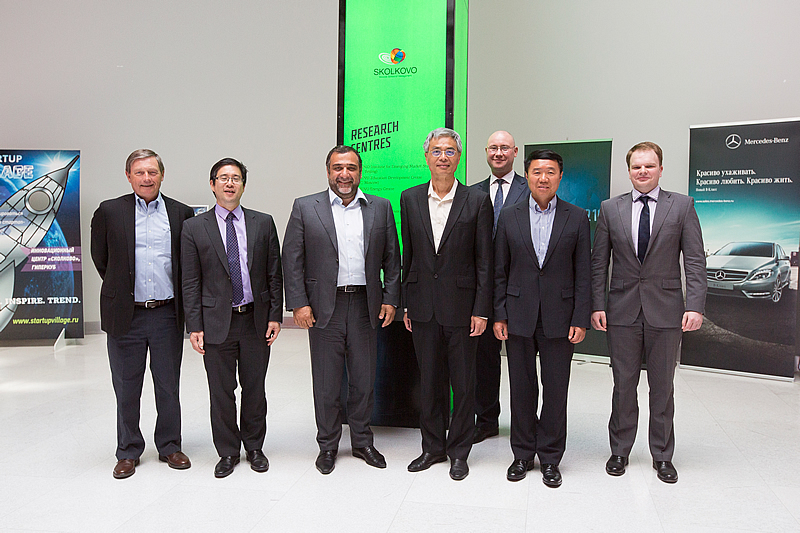 Prof. Albert Park, Director of HKUST IEMS, joined Prof. Wei Shyy, Executive Vice-President and Provost of HKUST, and Prof. Yan Xu, Associate Dean of HKUST Business School, in a visit to the Moscow School of Management SKOLKOVO on June 2-4, 2014. Initiated by Mr. Karl Johansson, former EY Managing Partner for CIS and Chairman of the Advisory Board of HKUST IEMS, the visit explored the potential for cooperation in the areas of both research on emerging markets and business training.

The HKUST delegation held discussions with Mr. Ruben Vardanian, Founding Partner and Vice-Chairman of the International Advisory Board of Moscow School of Management SKOLKOVO, Mr. Alexey Kalinin, Director of SKOLKOVO Institute for Emerging Market Studies (IEMS), directors of SKOLKOVO’s MBA training programs, and other SKOLKOVO faculty and research staff. Also joining the meeting was Ms Irina Lapidus, Development Director of the New Economic School in Moscow. These discussions led to agreements for HKUST IEMS to explore the potential for research collaboration with SKOLKOVO IEMS and the New Economic School by hosting a joint research workshop to be held during the upcoming academic year, and for HKUST’s School of Business to collaborate with SKOLKOVO on executive MBA training programs (each side will host their counterpart’s EMBA students in the coming year).

During their stay in Moscow, the HKUST delegates also had meetings with Ms Tatiana Leonova, Vice-Rector of the Far-East Federal University, Mr. Alexandr Povalko, Deputy Minister of Education of Russia, and leaders of the Skolkovo Institute of Science and Technology (Skoltech) to discuss the possibilities for broader engagement between HKUST and Russian universities.