Belt and Road: New World Order Experts from China, Russia and Hong Kong agree that One Belt One Road will have major ramifications for countries around the globe, especially those in Eurasia and the Asia-Pacific, but differ on the Initiative’s ability to transform development in OBOR economies. The experts spoke at a forum held during China’s Belt and Road Summit in Beijing earlier this month, organized by the HKUST Institute for Emerging Market Studies (IEMS). Prof. Justin Lin, former Chief Economist of the World Bank and current Director of the Center for New Structural Economics at Peking University, strikes an optimistic tone, pointing out that China can provide developing countries not just with financing but also with the technology and know-how that led to China’s own development success. Given rising wages in China, many Chinese firms are also poised to make investments that move labor-intensive production to OBOR countries. Alexey Kalinin, Director of the Institute for Emerging Market Studies at the Moscow School of Management SKOLKOVO, takes a more balanced stance in describing the impact OBOR may have on countries in Central Asia and the Caucasus. He emphasizes that countries in the region are highly diverse politically, ranging from liberal democracies to stringent autocracies, and also economically, especially in terms of energy resources. Alexey recognizes that the Belt and Road Initiative provides tremendous opportunity, but warns that successful investments will require awareness of each local context. “Who will pay for it?”, asks Prof. Alicia Garcia-Herrero, Chief Economist (Asia Pac.) at NATIXIS and HKUST IEMS Faculty Associate. The infrastructure needs of OBOR countries are so great, that they cannot possibly be financed adequately by China and the multilateral development banks. If the potential of OBOR is to be fully realized, much more progress needs to be made in devising new global financing arrangements that involve major commercial banks and public-private partnerships. Hong Kong banks could play a leading role, but only if they are proactive in responding to the opportunities of OBOR. The “One Belt One Road: Global Perspectives” luncheon was co-sponsored by the Center for New Structural Economics at Peking University and Moscow School of Management SKOLKOVO.

Alicia Garcia Herrero: Belt and Road - Great for Trade but Who is Going to Pay? from HKUST IEMS
Alexey Kalinin: One Belt One Road and Central Asia - Partnership for Growth from HKUST IEMS

Please note that Prof Lin did not use any presentation slides.

During Beijing's upcoming One Belt One Road Summit , the HKUST Institute for Emerging Market Studies will hold a luncheon panel discussion "One Belt One Road: Global Perspectives" on May 15 in Beijing, where 3 distinguished experts from China, Russia, and Hong Kong will offer different takes on the ambitious initiative and how it may transform development outcomes globally. The event is jointly organized by HKUST IEMS, Moscow School of Management SKOLKOVO, and the Center for New Structural Economics at Peking University. 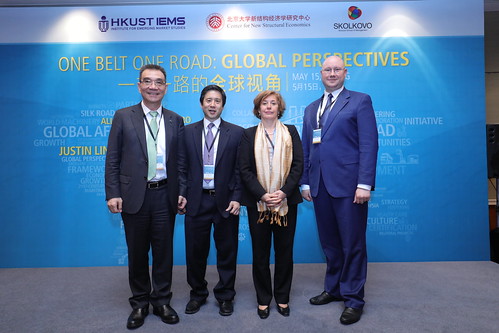 [Event] How to Better Our Implementation of the Initiative “One Belt One Road” by Prof Liu Mingkang (劉明康) on April 10, 2017