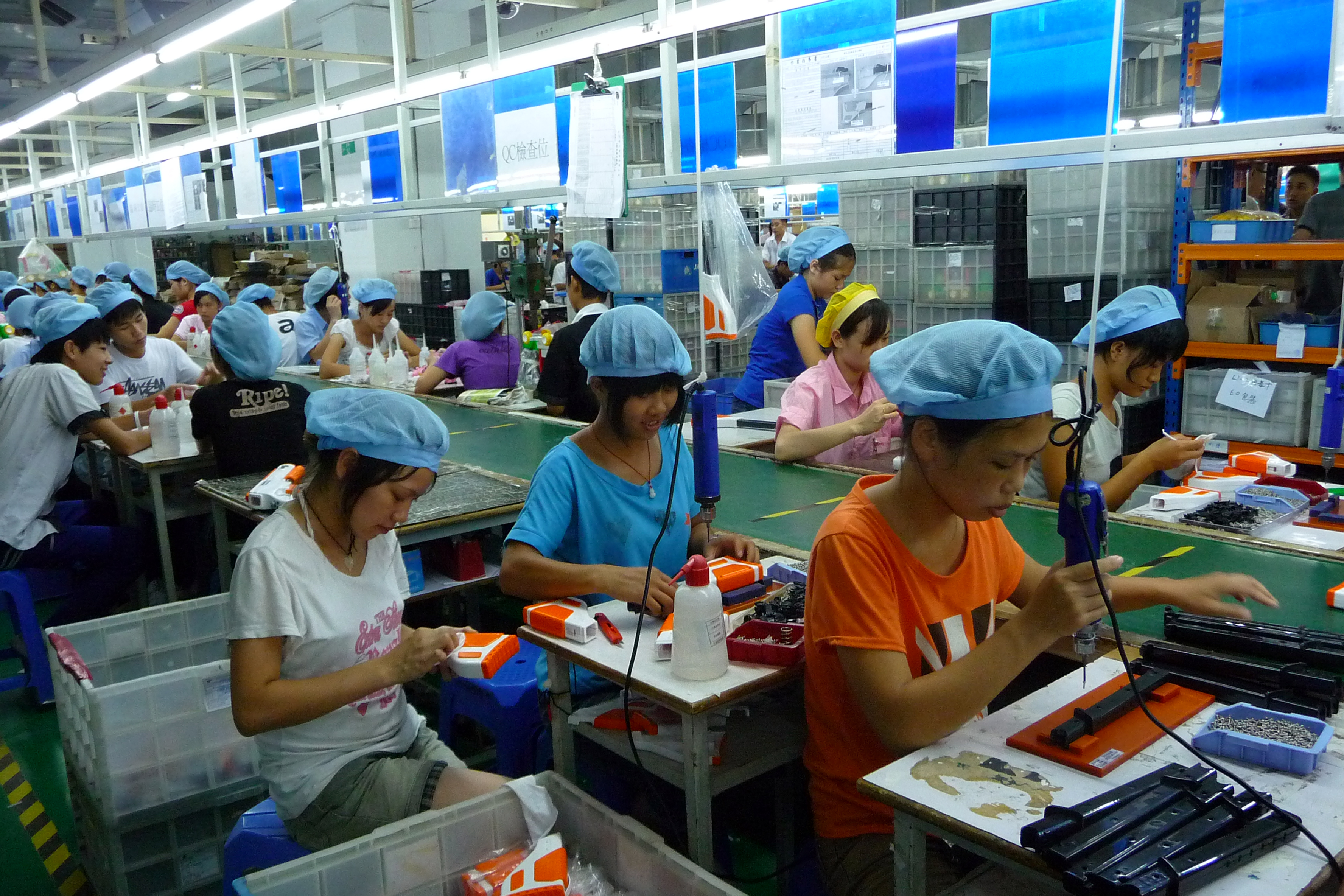 Dramatic increase in real manufacturing wages in China combined with slowing external demand, is putting great pressure on Chinese manufacturing firms. The tight labor market in China led to a high worker turnover rate of 26% in Guangdong from 2015 to 2016, with rates higher for younger workers below age 28 (37%) and migrant workers (30%). Upgrading requires making new capital investments such as in automated equipment or robots, often with government support. To support adjustment to rising labor costs, it is important for China to allow for open market competition and create a level playing field.

*** For better viewing experience, read this Thought Leadership Brief on the HKUST eBookshelf. ***

Due to rapid growth and robust labor demand, real manufacturing wages in China have doubled in just the past decade (Figure 1). This dramatic increase, combined with pressure on Chinese anufacturing firms, but there is limited evidence on how well firms are coping with these challenges. 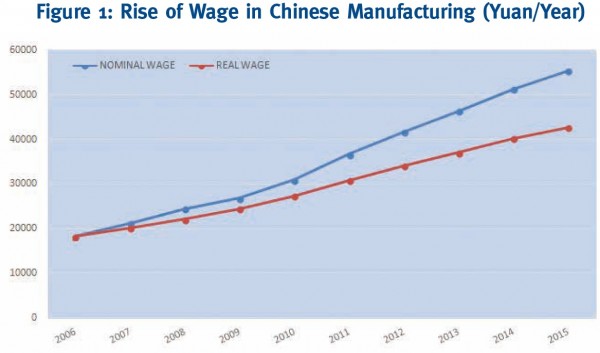 We present new empirical evidence on these questions using data from the Chinese Employer-Employee Survey (CEES), which surveyed a representative sample of 573 manufacturing firms in Guangdong Province in 2015, and 1122 firms in Guangdong - China’s most important industrial province and Hubei - the largest industrial province in central China, in 2016. In each firm, a random sample of ten workers were also surveyed, yielding samples of 4838 workers in 2015 and 9103 workers in 2016. The sampling frame for firms was the 2014 industrial census, with firms selected from 20 county-level districts in each province. The firm response rate was over 80 percent. The surveys were conducted by the Institute for Quality Development Strategy of Wuhan University in collaboration with HKUST’s Institute for Emerging Market Studies, the China Data Center of Tsinghua University, and the Institute of Population and Labor Economics of the Chinese Academy of Social Sciences.

Given the challenges of rising costs and weak demand, what was the profitability of Chinese manufacturing firms? According to the CEES data, the mean (median) profit rate of firms, defined as net-of-tax profits divided by sales revenue is 3.3% (2.4%) in 2015, with about 20% earning negative profits in both 2014 and 2015. Private firms are more profitable than state-owned enterprises (SOEs) or foreign firms. Managers reported that the factors most seriously restricting firms development were labor costs (60%) and market demand (56%).

According to CEES, the average monthly wage of manufacturing workers reached 4126 yuan (US$635) by the end of 201 5which is far below the US (US$3099 per month) but is nearly the same as in Brazil and significantly greater than in other emerging markets (Malaysia, Thailand, Mexico, Vietnam and India) (see Figure 2).

The tight labor market in China led to a high worker turnover rate of 26% in Guangdong from 2015 to 2016, with rates higher for younger workers below age 28 (37%) and migrant workers (30%). Turnover was greater in foreign enterprises (29%), and lower in state-owned enterprises (22%).

Upgrading requires making new capital investments such as in automated equipment or robots, often with government support. For example, the government in Dongguan, Guangdong, provides a 10% subsidy on the purchase of new robots.

The CEES survey finds that 8% of firms have robots, including 10% in Guangdong and 6% in Hubei, and 40% of firms have automated equipment which is 17% of all equipment (Fig. 4). A greater share of SOEs and foreign firms have robots (both are 14%) than private firms (6%); and regular and processing export firms are much more likely to have robots (15% and 11%) than non-exporting firms (5%). Use of robots and automation equipment are also much more prevalent in the machinery, electronics, and metal sectors, and least prevalent in the textile sector.

Innovation in China is important for maintaining international competitiveness. In 2015, mean R&D intensity (R&D spending/ revenue) was 1.8%, the average share of R&D personnel was 6.2%, and 45% of firms had R&D expenditures. There is much more R&D in SOEs than in foreign or private firms and much R&D is concentrated in designated high-tech firms. The share of firms with patents during the 2012-2015 period is highest for SOEs (67%), regular trading firms (59%), and high-tech firms (87%). The share of new products in sales rose from 7.7% in 2013 to 8.3% in 2014, and to 9.0% in 2015 which indicates that R&D spending is yielding tangible results.

How have government policies impacted firms? According to CEES, the majority of firms (52.8%) received subsidies (including tax reductions and refunds). The average subsidy rate is 2.6% in 2015, which is nearly equal to the average profit rate of 3.3%. The likelihood of receiving subsidies is much greater for SOEs (83%) than for foreign and private firms (50% and 49%).

In the past, there were concerns that private firms have difficulties accessing bank loans. However, CEES found that the frequency of bank borrowing surprisingly is not greater for SOEs (44%) compared to private firms (54%). It is lowest for foreign firms (23%).

Another policy issue is whether social insurance contributions is raising labor costs since regulations state that more than 40% of workers’ wages must go towards financing pension, health care, unemployment, injury, maternity, and other benefits. CEES found that social insurance contributions as a share of wages were only 17% due to lower effective contribution rates set by cities. Since wages account for about 18% of all production costs, benefits contributions amount to less than 3% of total costs which suggests that their negative influence on competitiveness may be overstated. However, the findings raise potential concerns about lack of enforcement and differential enforcement of regulations. 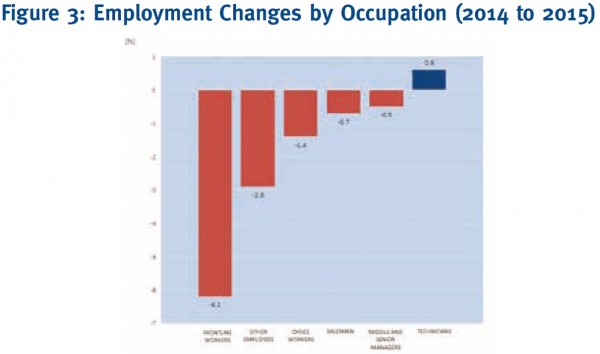 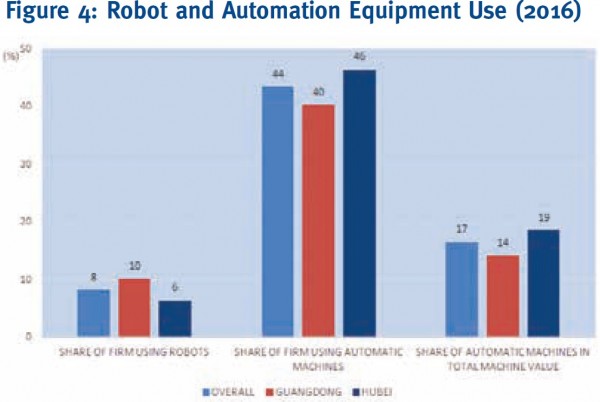 In an increasingly challenging environment of rapidly rising labor costs and high rates of worker turnover, China’s manufacturing sector is making efforts to adapt. A large fraction of firms are using automation equipment and robots. The mix of workers is becoming more skilled. Investment in R&D is being led by state-owned enterprises, exporters, and high-tech firms. New products account for an increasing share of sales. The government is supporting many firms with subsidies.

However, this response has been far from painless. A large number of firms are exiting or reducing employment. The worker turnover rate is high, and many workers are engaged in repetitive work. Investment in fixed capital and R&D has recently stalled. One fifth of firms have been earning negative profits even with subsidy support.

To support adjustment to rising labor costs, it is important for China to allow for open market competition and create a level playing field. There is concern that subsidy provision and enforcement of regulations is not the same in different regions and towards different firms. Favoring state-owned enterprises or restricting competition also undermines this goal.

Successfully coping with rising labor costs often requires new investment and spending on R&D and it is important for banks, patent offices, and courts that enforce intellectual property rights protection to operate in a professional manner to meet the needs of firms and minimize transaction costs. In the end, it will be the efforts of Chinese firm managers and workers themselves that will determine the future of Chinese manufacturing.

Cheng Hong is the Dean of the Institute of Quality Development Strategy in Wuhan University, Director of China Employer-Employee Survey (CEES) Management Board and Director of the Macro-Quality Management Collaborative Innovation Center in Hubei Province. He has served as visiting professor at Stanford University from October 2016 to October 2017, and at HKUST from April 2014 to October 2014. He has published over 100 papers in the Social Sciences Citation Index (SSCI) and Chinese Social Sciences Citation Index (CSSCI) journals, and consults frequently for many local governments in China.

Albert Park is the Director of HKUST IEMS, Chair Professor of the Division of Social Science, Professor of Economics and Public Policy at the Hong Kong University of Science and Technology. He is a development and labor economist who is an expert on China's economic development. Prof. Park has played a leadership role in numerous survey research projects in China including the China Employer-Employee Survey (CEES), the China Urban Labor Survey (CULS), the Gansu Survey of Children and Families (GSCF), and the China Health and Retirement Longitudinal Study (CHARLS). He previously held faculty appointments at the University of Michigan and Oxford University, and has consulted frequently for the World Bank.