Digital entertainment industries are blooming in emerging markets such as China and in India’s Bollywood, particularly for makers of movie production-related software. Taking the movie industry as an example, in 2012 the total gross revenue of the top ten domestic films was US $500 million for China and US $20.9 million for India. While impressive, these figures could have been significantly higher had China and India implemented more effective technical measures against copyright infringement. As illegal movie downloads become more pervasive and emerging markets introduce a growing number of their populations to the internet, movie studios can expect less-than-optimal revenues and overall digital piracy numbers to increase. The impact of copyright infringement on the movie industry is particularly noteworthy. For instance, in 2012, movie revenues climbed to US $10.8 billion while music revenues were US $1.7 billion. Given that movie revenues in particular are so high, the movie industry has the most to lose given the burgeoning issue of movie piracy.

To combat online copyright infringement, the United States and United Kingdom have adopted technical measures to de-list infringing materials. Delisting can prevent piracy by removing sites with infringing material from the search results and indexes of search engines such a Google, Bing, and others, effectively making the website “invisible” to those not already familiar with a given website. As recent trials in France have proven, such measures are an efficient way for policymakers to combat copyright infringement. In the United States, de-listing is one of the three major enforcement mechanisms under the “Stop Online Piracy Act” (SOPA). In early 2012 in the United Kingdom, major entertainment companies proposed voluntary regulations for search engines to de-list infringing websites. Leading entertainment companies are keen to see such measures expanded to other major markets.

The issue of copyright infringement is exacerbated in emerging market countries due to multiple factors, including weak enforcement and unavailability of legitimate copies of digital goods. Furthermore, in emerging markets, policies aimed at fighting copyright infringement are afforded fewer resources and are thus less effective than the policies in developed countries. In recognition of this fact, we have tried to identify more effective strategies for emerging market countries to de-list websites with infringing material, with requests for de-listing handled in a more efficient and timely manner.

To evaluate the effectiveness of delisting in each country, four movies were chosen based on their gross worldwide box office revenue. These movies were (A) The Avengers; (B) The Dark Knight Rises; (C) The Hunger Games; and (D) The Hobbit: An Unexpected Journey. Their corresponding search terms were (A) “Avengers”; (B) “Dark Knight Rises”; (C) “Hunger Games”; and (D) “The Hobbit”. The metrics for evaluating the effectiveness of de-listing were when to delist, and for how long.

The data in each column represents search trends as a proxy for infringing activities. The number “100” indicates peak infringement. Because infringing activities usually occur around the release date of movie, many zeroes are present, indicating that infringers were largely inactive for several months during the study.

Our results indicate that if de-listing were pursued only during the peak month of infringement, a significantly large percentage of infringing websites could be efficiently removed. Using The Hobbit in Hungary as an example, if de-listing activities began in December 2012, overall infringement could have been reduced by 54%. While this reduction is considerable, the other movies surveyed fared far worse, with only an 18% reduction seen for The Avengers in Thailand and The Hunger Games in both Thailand and Hungary.

The results in Table 1 show that it may be more effective to perform de-listing during the peak infringement months and the months before and after. Using the example of The Hobbit in Hungary, up to 78% of infringing websites could have been removed if de-listing was performed over the 3 months surrounding the peak.

Our final strategy was to de-list infringing search results for the three consecutive months containing the highest aggregate number of infringing searches. We evaluated the effectiveness of this approach by sliding a three-month window from the beginning of the study period until the end and calculated the total for each three-month period.

As seen in Table 2, our results show that the three months chosen using this methodology were all centered around the peak with the exception of The Hunger Games in Thailand. For this movie, the majority of infringing activities took place around the movie’s release date. Its peak, however, was not the same month as its movie release date, but rather its DVD release date of August 18, 2012. 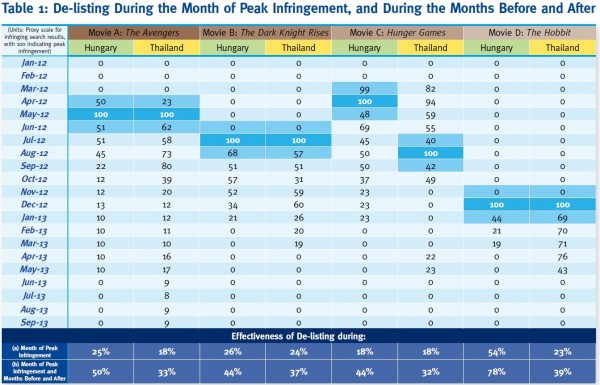 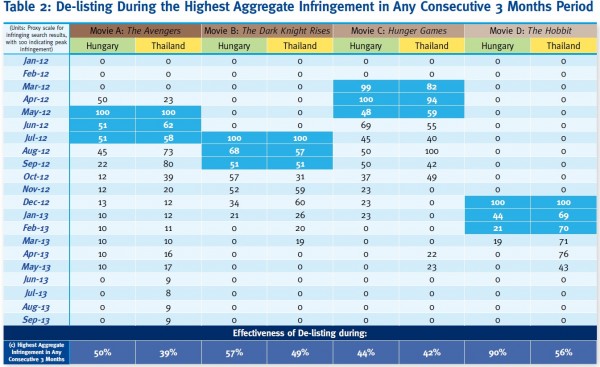 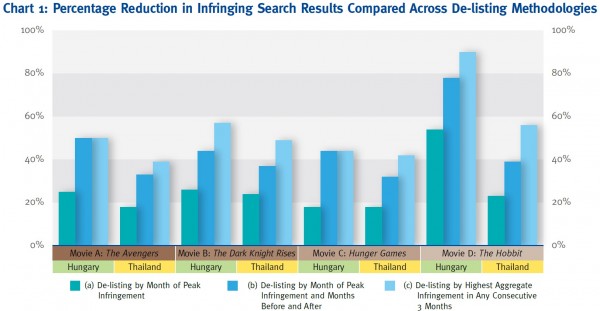 Clearly, approach (c) is the most effective amongst the three strategies, with the caveat that it would be difficult to determine the peak for real-world implementation purposes. Approach (b) is more effective than approach (a), but may excessively de-list search results. Approach (a) is less effective but also less restrictive, and could thus be more practical.

We find that there are two peaks of searches for copyright infringing digital media, specifically at the movie’s theatre release date and its later DVD release date. As a result, by de-listing infringing search engine results around the time of peak searching for for infringing material, movie piracy may be considerably reduced.

That said, there are a few tradeoffs in applying the technique of de-listing to real-world usage. While a longer de-listing window may more effectively suppress piracy, it may be prohibitively costly to detect and de-list infringing websites over a prolonged period of time. The optimal period to de-list may also vary by country. For some countries such as Thailand, peak infringement activity may occur during the DVD release date instead of the movie release date.

James S. H. Kwok is an Associate Professor of Business Education in the Department of Information Systems, Business Statistics, and Operations at the Hong Kong University of Science and Technology (HKUST) and HKUST IEMS Faculty Associate. James joined HKUST in 1997 as Assistant Professor, and joined California State University, Long Beach in 2004 as Associate Professor. James returned to HKUST as a teaching faculty in 2005. He has published in more than 60 journal and conference papers. His research areas include digital rights management, digital watermarking techniques, computer security, and hacking techniques.

Kai-Lung Hui is a Professor of Business Education in the Department of Information Systems, Business Statistics, and Operations at the Hong Kong University of Science and Technology (HKUST) and HKUST IEMS Faculty Associate. His research focuses on the impact of information technologies and the analysis of policies related to information technology use and development. His research has variously addressed topics such as the impact of law enforcement on crime deterrence on the Internet, digital divide, how piracy affected sales of legitimate items, and the impact of copyright law on the supply of creative works. His research has been published in scholarly journals including The American Economic Review: Papers and Proceedings, Information Systems Research, Management Science and MIS Quarterly, among others.