Expressways in China: Impacts on Growth and the Environment

With a vast territory, China depends heavily on inter-city expressways (controlled-access highways) to facilitate within-country trade. From the 1980s to 2015, China’s national expressway network expanded from zero to more than 111,000 kilometres, becoming the world’s largest expressway system by length (Figure 1). It was designed to connect large, metropolitan cities, yet many smaller counties between major cities also gained access.

Now, more than half of Chinese counties are connected to the system, transforming both less- and more-developed counties.

Such transformation is not uniform throughout the country, even though the expressway network was originally conceived as a unified, economic policy that would benefit all, and implemented as such. Such blanket policies risk unintended consequences, and it is important to ask not only how such policies affected the country—at both the county and national levels—but also to understand the channels through which it did so. 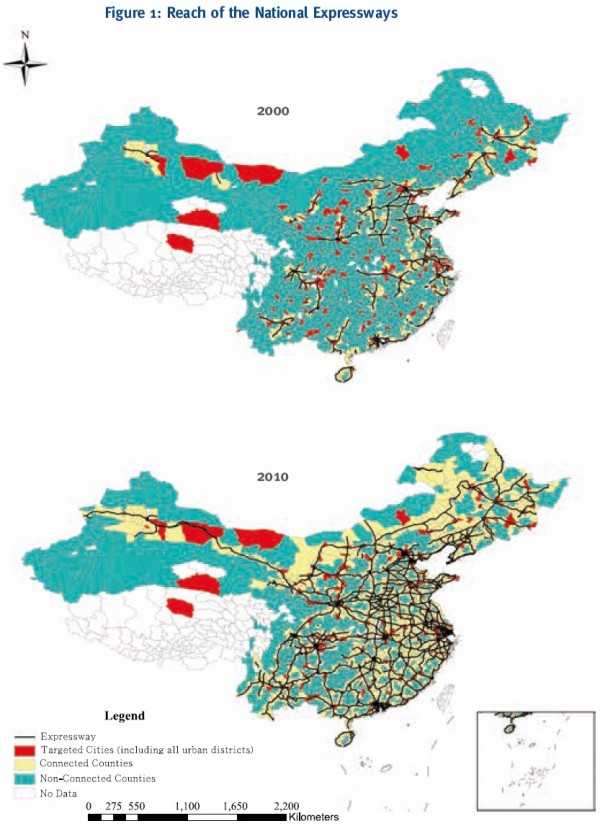 A closer examination revealed that expressway connection affected different counties differently, depending on their initial development levels. As Fig 2 illustrates, for the poorest 25% of counties expressway connection increased GDP at the cost of the environment but decreased both income and pollution for the richest 50% of counties. In-between, the middle-to-low income (25%–50%) counties saw the best of both worlds, with increased GDP and reduced pollution.

Zooming in slightly, we see that poor counties started to industrialize after expressway connection, while rich counties began to deindustrialize. In poorer counties after expressway construction, not only did polluting firms become dirtier, but new ones appeared. Meanwhile in richer counties, the opposite was true, with polluting firms becoming cleaner or disappearing altogether. Overall, expressways play an important role in shaping the industrial structure of the national economy.

The economic intuition behind these predictions is that, given different initial conditions, to take advantage of an opportunity to develop, different economies can choose different development paths: poor (but clean) regions prefer to grow in a polluting way, while rich (and polluted) regions may be willing to sacrifice some income to maintain environmental quality. 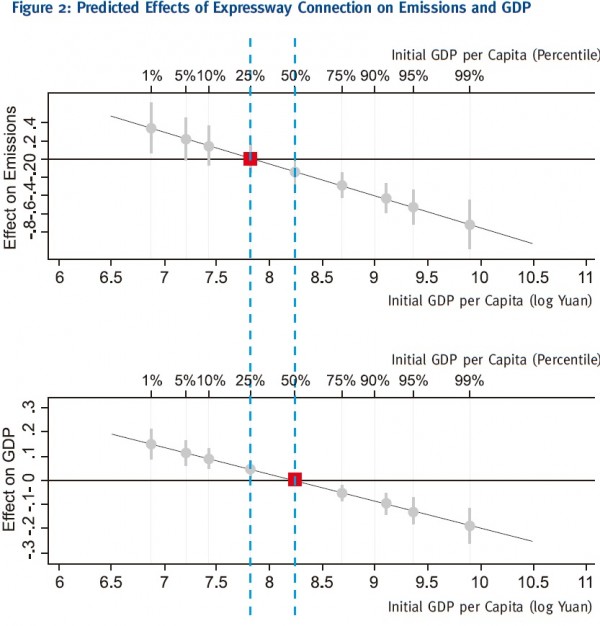 Our findings have several policy implications. Firstly, policy-makers should tailor their solutions depending on the development level of specific regions. As shown, productivity-enhancing policies can cause different effects in different regions, as they choose different development strategies. The desired emission-income combination may depend on a region’s initial income or environmental quality. In this context, a single, unified economic or environmental policy can cause welfare losses. In fact, this is the case across any economy with large regional income and environmental disparities, whether on a global scale across developed and developing countries, or within large countries such as China or India. In these examples, tight environmental standards favored by rich regions can harm poor regions that prefer more polluting development strategies.

Secondly, not only can redistributive policies tackle income inequality issues in China, but they can also address increasingly political environmental issues. While governments may favor a highly-diversified policy portfolio across different regions, this practice nevertheless invites criticism from environmental organizations who advocate environmental protections, or political parties which focus on raising income levels through growth. These conflicting policy preferences create political conflict, centered around the trade-off between rapid development and its environmental costs across various income groups. Re-distributive policies can incentivize regions to reduce pollution levels.

Finally, large infrastructure projects or policies which transfer technology can be used to develop poorer regions faster, thus limiting the environmental impact of development. Otherwise, increases in productivity can degrade environmental quality, at least in the initial stages of economic development. Currently, since many less-developed countries have not yet reached the middle-income level, we may see a further deterioration of global environmental quality. It is likely that only when countries reach middle-income levels will we start to see income develop alongside environmental quality. One way to accelerate this change could be to introduce intense, productivity shocks to less-developed countries, allowing them to achieve middle-income status quickly. In practice, developing countries have seen success with technology transfers from rich countries or infrastructural improvements, and policies which facilitate either can be effective solutions.

Guojun He is an economist working on environmental, health and development issues at the Division of Social Science, Division of Environment and Department of Economics, at HKUST. He is also a faculty associate at the IEMS and Institute for Public Policy (IPP). His current research focuses on understanding the complex relationship between economics development, environment and human health from an interdisciplinary perspective. Before joining HKUST, he was a research fellow at Harvard University, and obtained his Ph.D. degree from U.C. Berkeley.