Innovate or Die: How Hong Kong-owned Manufacturing Firms in China Can Survive and Thrive

Many economists believe that innovation generates economic development and growth. What role might this principle play in boosting economic growth in Hong Kong in the era of Chinese economic reform and Hong Kong’s transition to postcolonial status? Since 1979, many firms in Hong Kong have been operating as traders in Hong Kong and as proprietors or partners in plant facilities in China, particularly in Guangdong province, importing goods from their factories in Guangdong and subsequently re-exporting them from Hong Kong. Following this business model, Hong Kong entrepreneurs have successfully reduced manufacturing costs by leveraging cheap, abundant labor and land as well as cultural and linguistic familiarity to establish manufacturing operations in Guangdong, primarily in the Pearl River Delta.

This formula for success has been threatened, however, by government policies affecting Guangdong’s manufacturing environment that have penalized low-end, low-cost manufacturing as China, like many emerging market countries, seeks to move up the value chain and emphasize high-tech, high value-added industries. The policies include requiring exporters to pay a hefty deposit to import some two thousand raw materials; cancelling or reducing tax refunds on a range of goods; strengthening of the Yuan; strictly controlling pollution; and granting new welfare benefits to employees. A sweeping new labor law also adds to the burden on manufacturers. In addition, like firms in many emerging markets, those in Guangdong have also faced rapidly rising wages and escalating global prices for energy and raw materials.

These challenges have forced highly polluting firms operating in labor-intensive industries, many managed or owned by Hong Kong–based entrepreneurs, to choose between shutting their factories altogether or moving elsewhere in China or abroad. Hong Kong–based manufacturers argue that the one–two punch of the high cost of relocation and higher operating costs effectively make relocation out of Guangdong a suboptimal choice and staying there even more problematic. The evidence suggests that rising costs are the main factor when firms move out of Guangdong, while attractive conditions for business expansion at other locations rarely persuade business owners to relocate (Figure 1). 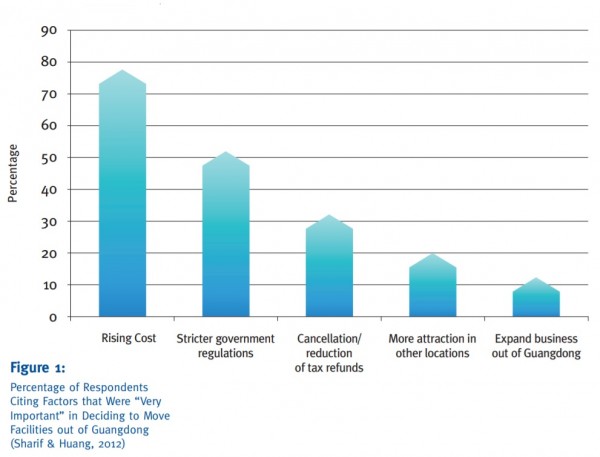 Economists have long argued that innovation plays a key role in firm survival, not only in normal times but also in economic downturns, enabling firms to manage emerging or “disruptive” technologies while continuously improving existing capabilities. Relocation represents an alternative survival strategy for weathering challenging conditions. Many economists view this as a function of “pull” factors, or the attractiveness of a region, and “push” factors, or factors that trigger relocation.

Hong Kong–owned manufacturing firms enjoy a competitive advantage in Guangdong based on geographic, cultural and linguistic familiarity that other provinces in Mainland China cannot replicate. Beyond Guangdong, weak pull factors in other Chinese provincial economies discourage relocation out of the province. The question is whether, in a region experiencing rapid industrialization and growing innovation linkages, Hong Kong–owned manufacturing firms in Guangdong that undertake R&D or collaborative innovation activities there will find it easier to survive the current economic challenges. Do they innovate or do they die?

A recent study conducted a detailed innovation survey of Hong Kong-owned enterprises in Guangdong, using the questionnaire of the Fourth European Community Innovation Survey (CIS-4), with members of the Chinese Manufacturers’ Association (CMA) of Hong Kong and other firms (Sharif & Huang, 2012). There are several lessons to be learnt from this study of innovation strategies and related decisions made by Hong Kong–owned firms with respect to relocating from Guangdong or ceasing operations. Firms that choose to close see moving to neighboring provinces as nonviable insofar as those provinces lack the cultural and geographical affinities that attract Hong Kong firms to Guangdong. Moreover, as other coastal regions in Mainland China upgrade their economies, the study helps us understand the process through which, promoted by Beijing, manufacturing activity is moving inland to hinterland provinces (Jiangxi, Hunan, Shanxi, Guizhou, Henan, Anhui, Hubei, etc.) not only from the Pearl River Delta but also from the Yangtze River Delta. Such lessons apply at both the firm level and the provincial government level, provided that governments indeed seek to exploit this trend. 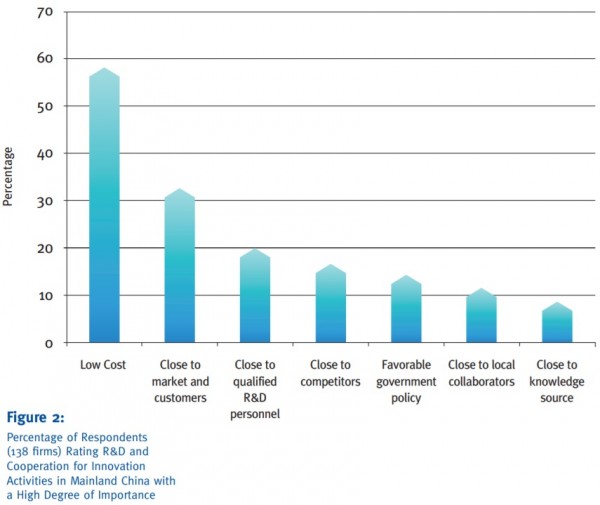 The research also suggests policy implications for both the Guangdong and Hong Kong governments. In spite of the obstacles stemming from macro-level Chinese reforms, such as bottlenecks in the reform process and inconsistent industrial policies, the survey identifies several areas that provincial authorities and Hong Kong should target for improvement.

The first area of improvement involves strengthening links between universities or public research institutes and industry. Here, the onus lies mainly on the university sector to strengthen such links by embracing commercial research activities that include technology transfer and consultation services. Consultation services are typically offered through a university’s technology transfer office, which serves as a bridge between the university and the industrial and business communities by identifying and pursuing collaborative opportunities with industrial and business enterprises.

We know that developing innovation actors—universities, public research institutes, industry associations, etc.—within an economy’s innovation system is necessary, but it is not enough. An innovation system may develop isolated islands of strength but they are of little value unless their contributions spread throughout an economy’s wider innovation system. Given the amount of public funding that is devoted to developing research institutions in both Guangdong and Hong Kong, stronger ties between knowledge producers and manufacturers would not only enable Hong Kong–owned manufacturing companies to survive in Guangdong, it would also help them move up the value chain and innovate to improve the products they manufacture (a major goal of Guangdong’s government) and the processes through which they make them.

Second, the survey suggests that policymakers in Guangdong and Hong Kong should devote resources to developing a truly regional innovation system, combining their strengths and capacities, which could prove vital in a region experiencing rapid development that seeks to leverage the benefits of innovation. As a first step, the two governments should formulate innovation policy jointly and cooperatively. Policy cooperation will allow one economy’s strengths to be leveraged by the other economy while camouflaging innovation system weaknesses on both sides.

To be sure, the survey results indicate that government financial support has not encouraged many old-school firms to undertake R&D or innovation collaboration in Mainland China, so policymakers should not only concentrate resources on supporting R&D in high-tech sectors, but also ensure that these allocations are used to enable companies in low- and medium-tech sectors to acquire advanced machinery and equipment, implement advanced training programs, and purchase or license patents or other knowledge-based resources. Such a policy approach would enable Hong Kong–owned manufacturing firms to survive and thrive in Guangdong and integrate more deeply into Guangdong’s economy and innovation system while Guangdong’s Hong Kong–based firms leverage the strengths of Hong Kong’s innovation system (especially the higher education sector) as they scale the value-added chain.

Ultimately, the goal of developing Guangdong’s and Hong Kong’s innovative capacity into an effective regional innovation system, if executed intelligently by achieving deeper integration between manufacturers and service providers in Guangdong and Hong Kong, would boost the regional economy. By combining their strengths, such manufacturing and service firms could more easily develop intellectual assets, efficient production skills, new modes of service, and products that serve as irreproducible proprietary assets. That’s an achievement that policymakers in both Hong Kong and Guangdong would surely welcome.

Naubahar Sharif is an Associate Professor in the Division of Social Science at the Hong Kong University of Science and Technology. He earned his PhD in ‘Science and Technology Studies’ from Cornell University in 2005 and completed the Executive Education programme in Innovation for Economic Development at Harvard University in 2011. He has published numerous academic articles in leading journals including Research Policy, Science and Public Policy, International Journal of Technology Management, and Science Technology and Human Values and has received external funding from the Research Grants Council (RGC) of Hong Kong under the auspices of the General Research Fund (GRF) as well as the fund for Public Policy Research (PPR). Naubahar also consulted for the Innovation and Technology Commission (ITC), HKSAR Government from 2006 to 2010. He is currently associate editor for the Journal of Knowledge-Based Innovation in China (published by Emerald) and a scientific committee member for Innovation and Development (published by Routledge). His research interests include the innovation-related and economic linkages between Hong Kong and Guangdong.