How Do Minimum Wage Policies Affect Workers in Emerging Markets? 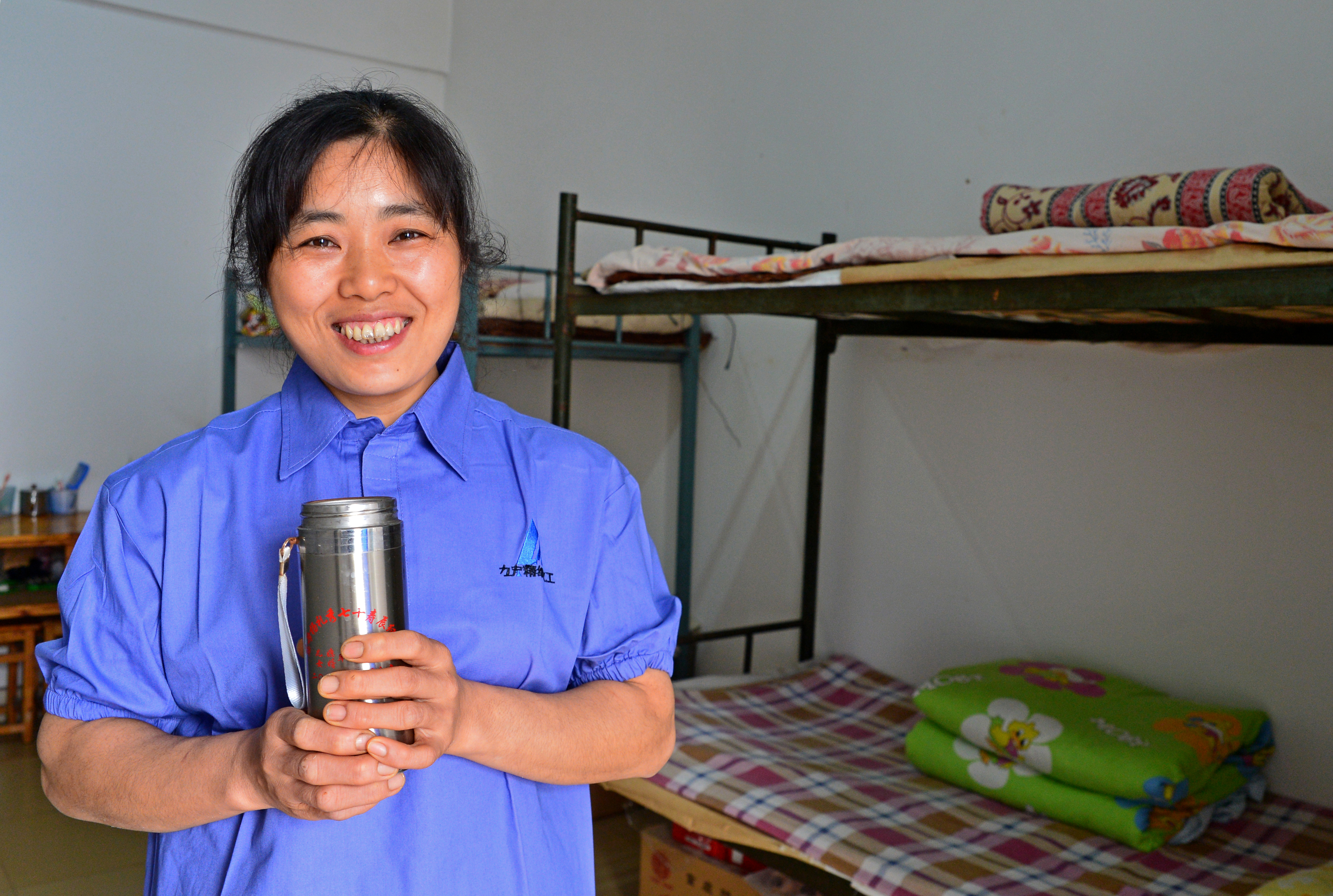 Minimum wage policies are gaining popularity globally and in the major emerging markets, despite unsettled debates over the impacts of minimum wage regulations. In this brief, we summarize what is known about the role of minimum wages in emerging market countries, focusing on the BRICS countries (Brazil, Russia, India, China, and South Africa). We examine how minimum wages are set, how well they are implemented, and their impacts on employment, inequality, and informality, concluding with policy recommendations. 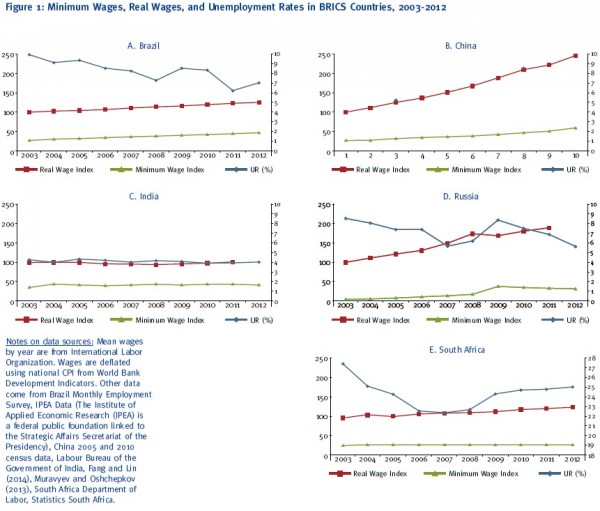 How are minimum wages set? Government-set minimum wages exist in all BRICS countries. However, the policy process for determining minimum wages varies greatly. In China and Russia, central governments have led major reforms of minimum wage policy (China in 2004, Russia in 2007) but have decentralized minimum-wage setting authority to regional governments. In Brazil, following military dictatorships, the 1988 Constitution required that a national minimum wage be set to meet the basic needs of all workers and their families. In India, central and state governments appoint tripartite advisory boards composed of government, employer, and worker representatives. In South Africa, minimum wages are negotiated as part of collective bargaining processes in each sector, with unions representing workers’ interests.

Not surprisingly, these different procedures reflect different objectives, priorities, and implementation challenges, leading to different outcomes. Table 1 summarizes the growth rates in minimum wages and average wages over the period 2003 to 2011 as well as the ratio of minimum wages to mean wages in 2011. Figure 1 plots trends in real minimum wages, real wages, and unemployment rates since 2003 for each BRICS country. In the figure for each country, the mean wage in 2003 is set equal to 100 and all other wages (both minimum wages and mean wages in other years) are valued relative to the 2003 mean wage after controlling for inflation.

Compliance and informality. In contrast with advanced countries, there is ample evidence that lack of enforcement and compliance with minimum wage laws is a major problem in emerging markets (Bhorat and Stanwix, 2013). Among BRICS countries, compliance has been found to be low in India and South Africa particularly, and significantly better in Brazil and the former socialist economies of China and Russia (Bhorat et al, 2012a; Rani et al, 2013; Fang and Lin, 2014). Factors contributing to low levels of enforcement include lack of government capacity, lack of political will to enforce regulations that increase the costs of business, and the difficulty of enforcing regulations in large informal sectors.

Government efforts to increase enforcement of minimum wage laws in Brazil led to greater compliance, more formal employment, and higher wages (Almeida and Carneiro, 2011). However, in South Africa having more labor inspectors did not significantly influence compliance (Bhorat et al, 2012), although compliance was significantly influenced by the minimum wage level. Other research confirms a strong inverse cross-country relationship between compliance and the level of minimum wages relative to mean wages (Rani et al, 2013).

Lack of compliance directly undermines all potential impacts of the minimum wage, both positive and negative, and may partially explain why researchers have found fewer negative impacts on employment in developing countries. However, differences in enforcement across regions, formal versus informal sectors, and different firm types, can lead to distortions in employment incentives leading to higher informal small-firm employment.

Minimum wages are expected to lift wages at the bottom of the wage distribution and thus reduce inequality. The magnitude of these effects depends upon the level of the minimum wage, the extent of coverage and compliance, and employment impacts. Impacts on poverty reduction also depend on whether those affected by minimum wage policies tend to live in poor or nonpoor households. For instance, if teenagers’ wages are increased by higher minimum wages, poverty will not be reduced if most teenagers live in richer households (Burkhauser and Sabia 2007).

A few studies of emerging markets have empirically assessed the impact of minimum wages on inequality and poverty. In Brazil, minimum wages have increased the wages of those at the bottom of the wage distribution in the formal sector and those at the higher part of the income distribution in the informal sector (Lemos, 2009), resulting in a more compressed wage distribution. In China, minimum wages have reduced inequality in the bottom half of the wage distribution (Lin and Yun, 2014). A simulation analysis using household data in India finds that with perfect compliance, India’s minimum wage policy could reduce the gini coefficient of wage inequality by 5-9 percentage points and reduce the poverty rate of casual wage workers by 5-8 percent (Besler and Rani, 2010). One study on Russia concluded that the minimum wage was too low to have a meaningful impact on poverty reduction (Bolsheva, 2012).

Setting minimum wage levels. If minimum wages are set too low, they will fail to ensure a living wage for workers and their families. If they are set too high, they may reduce employment or lead to widespread non-compliance. The challenge, then, is to set minimum wages at a level which balances these concerns using a procedure that is depoliticized, informed by current labor market conditions, and engages all key stakeholders.

< strong> Creating a level playing field. Incomplete coverage of workers, multiple lines for different occupations or sectors, and unequal enforcement of regulations distorts employment incentives and reduces the efficiency of labor and capital allocation. It is thus advisable to reduce complexity of the minimum wage system by setting minimum wages that cover all workers and which are uniform by region and equally enforced.

< strong> Poverty targeting. The potential for minimum wage policies to reduce poverty will depend on the household characteristics of low-wage workers, which requires systematic valuation. Poverty targeting through minimum wages often will be highly imperfect, requiring alternative or supplementary schemes to achieve poverty reduction objectives.

Albert Park is the Director of HKUST IEMS, Chair Professor of the HKUST Division of Social Science, and Professor of the HKUST Department of Economics. He is a development and labor economist who is an expert on China's economic development. His research has been featured by the Economist, New York Times, Wall Street Journal, BBC, CNN, and NPR. He currently serves on the editorial boards of the Journal of Comparative Economics, Oxford Economic Papers, and Chinese Economic Review.

Qing Xia is currently an Investor Relations Officer at the China Merchants New Energy Group, and previously assisted with academic research projects at the HKUST IEMS. She earned her B.A. in Economics and Hispanic Language and Literature from Peking University, and later earned an MPhil. degree in Social Science from HKUST. Her research interest is in development economics, with specific focus on labor markets, higher education, and healthcare in Mainland China.