Both rising inequality and concerns over the competitiveness of national economies have emerged at the forefront of policy discourse today. As opportunities to transfer existing technologies from developed countries diminish, promoting innovation is of particular importance for emerging markets seeking to maintain growth momentum. Thus, policy-makers today are demanding policies that make firms in their countries more innovative, and hence competitive. At the same time, they also often argue in favor of higher taxes on corporations as a means to solve two other major problems in many societies today: rising inequality and bloated fiscal deficits.

But are these two objectives independent of one another, or are they in fact at loggerheads? Do higher corporate taxes also simultaneously reduce the innovativeness of firms, making them less competitive in a global marketplace?

Corporate taxes might have a direct effect on the innovation environment, and hence an economy’s growth prospects. For one, the decline in after-tax profits from innovation projects following tax increases can cause innovators to redirect effort to other, non-innovative activities since the output from innovation is now likely to bring in lower after-tax earnings.

Tax changes may also discourage innovation if the change makes the tax schedule more progressive, which can happen for example, if the tax rate is increased on the highest income brackets leaving the lower brackets unchanged. This effect arises because innovation projects typically have higher upsides and are riskier than most other investment opportunities available to firms. For example, suppose a firm is choosing between two projects that cost the same. One is an innovation project that can lead to $100 million in incremental sales with a 20% chance; but if it fails the firm cannot recuperate any costs. The other project is a safe but non-innovative investment, which leads to $18 million in incremental sales for sure. Suppose that before the tax change both projects were taxed at 10%, but now the government increases the tax rate to 20% beyond the first $50 million in earnings. These tax considerations reduce the attractiveness of the innovation project.

Taxes also affect firms’ project choice decisions by affecting their financing model. A tax hike may raise the attractiveness of debt for firms due to the tax deductibility of interest payments. However, debtholders typically do not like managers undertaking innovative projects due to their inherent risk. If a project succeeds, debtholders do not get extra returns, yet they face the costs of failure if the project fails. Moreover, higher corporate taxes tend to lower internal cash flows of firms, which often constitute a major source of financing for innovation activities. So even besides their effect on incentives, corporate taxes can also affect innovation through the financing channel.

Despite all of these theoretical reasons why taxes might hinder innovation, many policy makers question whether any such effect exists in practice. Tax-proponents point out that R&D expenditure is tax deductible in many countries. They also cite the popularity of R&D tax credits, which they suggest may mitigate the effect of higher taxes. Furthermore, they argue that raising the corporate tax rate should have no effect on innovation activity, given the many sophisticated tax avoidance strategies available to firms.

This disagreement makes it important to empirically examine whether corporate taxes have any real effect on innovation. 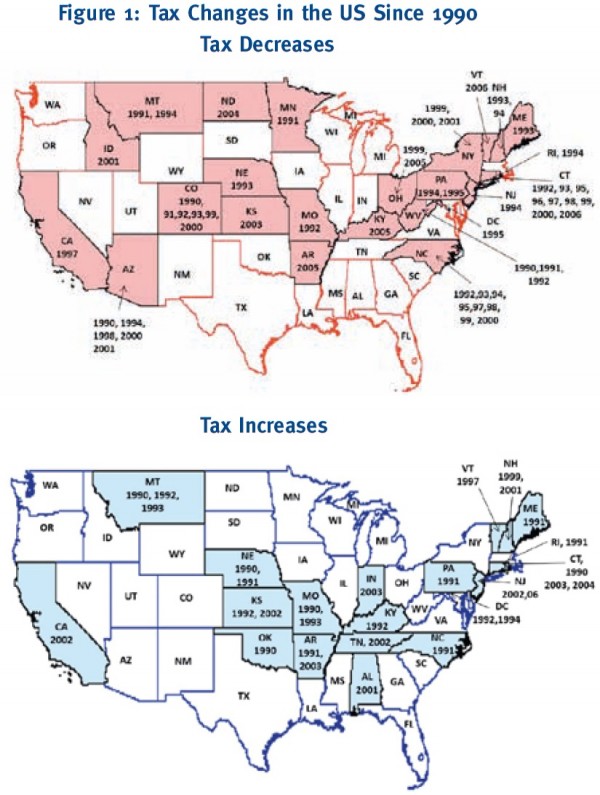 Our research, recently published in the Journal of Financial Economics, examines the effects of corporate tax changes on patenting activity from two perspectives, providing insight into its consequence for future innovation activity. First, a country-level analysis of US patents shows how changes in the corporate tax rate affects firm patenting. Second, a comparative study of tax-changing states and similar, tax-steady states helps us account for general trends.

This is consistent with the view that cutting funds for a prospective R&D idea quickly leads to reduced innovation. For instance, the firm might have to dismiss R&D personnel, reducing the chances of success for the project. Conversely, putting more money towards R&D does not lead to quick benefits. It takes time to hire and train additional R&D personnel, or to incentivize existing personnel to come up with new ideas. Because of this asymmetry, policies affecting innovation face a certain stickiness – discouraging innovation is easy, encouraging innovation takes time.

While our inter-country results show us the big-picture relationship between taxes and innovation, they do not distinguish between tax-effects on innovation and other, country-level economic conditions which may influence both tax policy and innovation.

To sharpen identification, we examine a within-country setting – specifically, the impact of corporate income tax changes at the state-level in the US. Unlike federal tax changes, which occur infrequently and affect all firms simultaneously, state tax changes happen more often and at different times. A state-level study helps us isolate the effects of tax changes from national changes in the economic and policy environments which may also affect firm innovation. This enables us to estimate the size of the tax effect more precisely.

The main result of the analysis is that a one-standard-deviation change in corporate taxes (1.5%) induces 37% of firms to file one fewer patent within the next two years. This is a substantial effect given that the average firm files about 9.1 patents per year, reducing patenting relative to pre-tax change levels by roughly 5%.

Analysis shows that taxes also affect R&D investment, citations and the relevance of patents, as well as new product introductions by firms.

Regarding fiscal policy, opponents of corporate taxation often suggest that corporate taxes discourage innovation, as they discourage risk-taking. The data agrees – firms respond to tax increases by filing less patents, investing less in R&D, and bringing fewer new products to market. Meanwhile, there is only weak evidence that cutting taxes incentivizes innovation activity. This asymmetry shows how discouraging innovation is straightforward, yet encouraging it is both difficult and takes longer. So while increasing corporate taxes may lead to short term fiscal gains, such gains may be offset by drops in innovation over a longer period. Given the importance of innovation in driving modern economic growth, governments should think twice before making such a choice.

Our results speak to the ongoing debate on corporate tax reform in many countries. While governments and corporate leaders argue over the costs and benefits of such plans, our research strikes a cautionary note: cutting corporate taxes might not make firms in these countries more innovative, at least not in the short run.

And for countries thinking about easing fiscal deficits and inequality through tax hikes, our message is even clearer: tax increases will likely lead to lower innovation, and it will not be easy to reverse these losses quickly by cutting taxes back later.

Abhiroop Mukherjee is an Associate Professor of Finance at the Hong Kong University of Science and Technology. Abhiroop received his PhD in Economics from Yale University, where he worked under the supervision of Professors Nicholas Barberis, Andrew Metrick, and Robert Shiller (Nobel Laureate, 2013). He studies issues related to behavioral and institutional finance, and his research has been published in the Journal of Finance, the Journal of Financial Economics, and the Review of Financial Studies. Abhiroop has received recognition for both teaching and research, and some of his work has also been used by Central Banks and think tanks for policy purposes.

Alminas Zaldokas is an Assistant Professor of Finance at the Hong Kong University of Science and Technology as well as Faculty Associate of the IEMS. His research interests lie at the intersection of industrial organization and corporate finance with a specific focus on the financial implications of firm innovation and product market collusion. His research has been published in the Journal of Financial Economics and the Journal of International Economics. He received his PhD from INSEAD in 2012.