Localizing Chinese Enterprises in Africa: from Myths to Policies 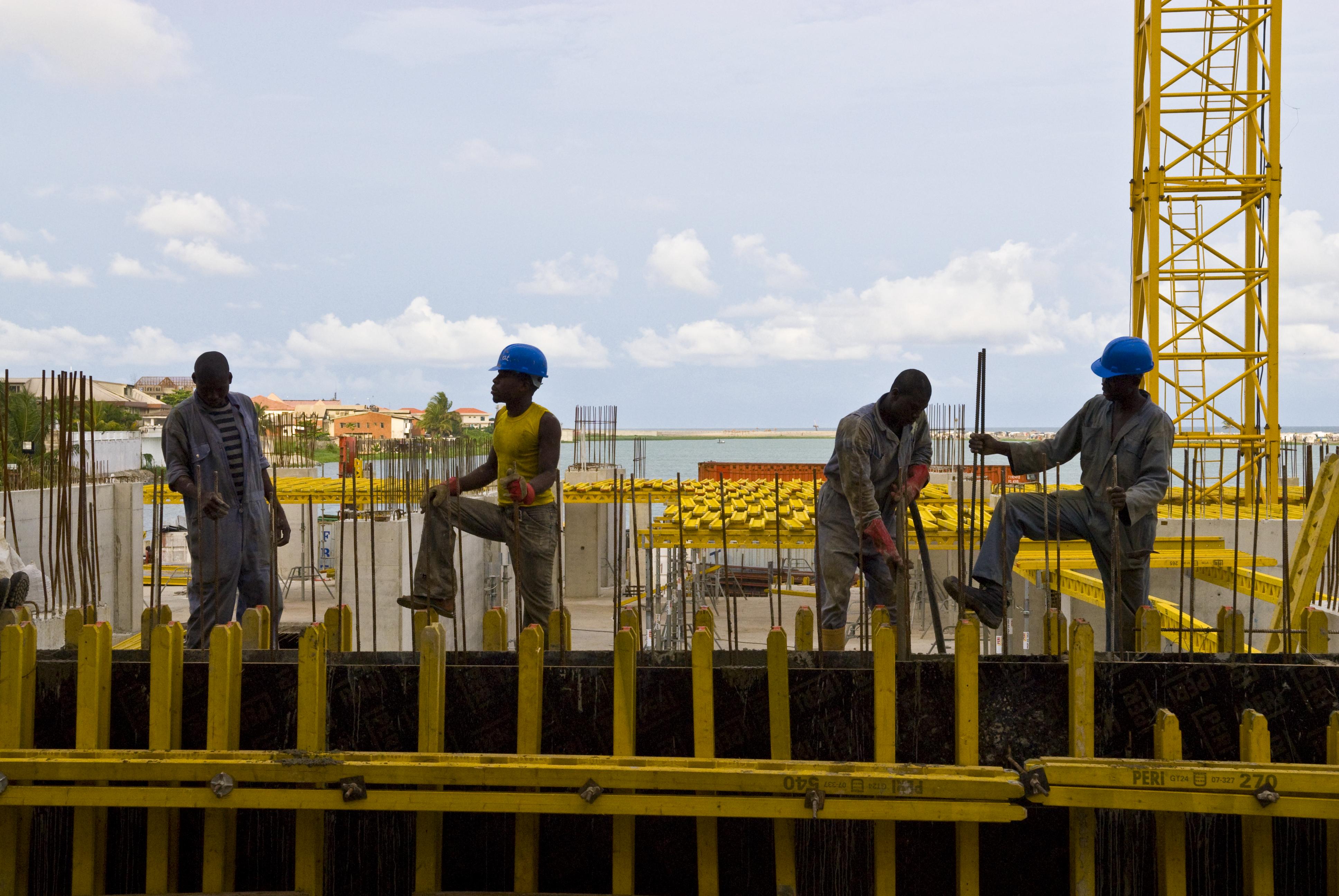 Do Chinese enterprises in Africa contribute to employment by localizing workforces? The most widespread, persistent concern expressed in Western discourses of China’s interface with Africa is that Chinese firms “bring their own” and do not hire locals. US political leaders framed that view as a mantra of 2014’s US/Africa Summit. President Obama stated that his “advice to African leaders is to make sure that if, in fact, China is putting in roads and bridges, number one, that they’re hiring African workers.” Vice President, Joe Biden, in a “swipe at China,” said “America is proud of the extent to which our investment in Africa goes hand-in-hand with our efforts to hire and train locals to foster economic development and not just to extract what's in the ground.” Secretary of State John Kerry rhetorically queried of China’s infrastructure-builders in Africa “how many Chinese come over to do the work?”

For African leaders, localized foreign-invested enterprises are a developmental and political necessity. African managers and engineers see them as vital to career paths and trade unionists and NGOs view them as a key to better labor-management relations and greater corporate social responsibility. Western politicians and media influence African elites to assume that Chinese firms are coming up short on localization; yet, none have had systematic data about what has been done and what is still needed to localize Chinese enterprises in Africa. 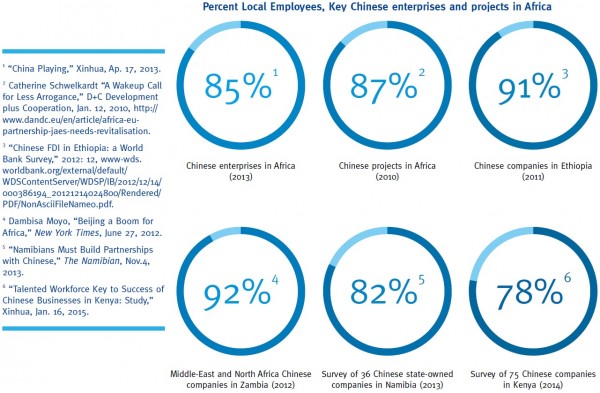 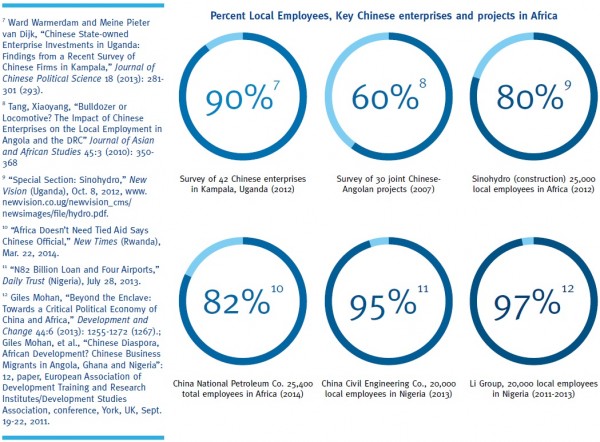 Localization first and foremost concerns employment, but also choice of suppliers and sub-contractors, adaption to host country laws, customs and markets, and communication and socializing with local people. Our database on workforce localization shows that, on average, locals are more than four-fifths of employees at 400 Chinese enterprises and projects in 40- plus African countries. The proportions are however are much lower for top managers and significantly lower for engineers and other professionals.

There is some variation among Africa’s 55 states in localization rates at Chinese enterprises and projects. Those in construction in Angola and Algeria have lower than average (but still majority) proportions of locals, Angola because of de-skilling due to 27 years of war and Algeria because of migration of skilled workers to Europe. South Africa and Zimbabwe’s higher industrialization and education levels result in especially strong localization at Chinese firms.

Extractive industries, manufacturing and construction mostly have 80%-95% local workforces, although construction has examples of local skills shortages or host government political needs for rapid project completion requiring that work-intensive Chinese be brought in. The lowest rate of workforce localization is among the two large Chinese telecommunications firms, the private Huawei and the state-owned enterprise (SOE) ZTE; yet, despite acute shortages of engineers and technicians in many African states, these companies do have half-to-two-thirds local workforces. There is generally no sharp distinction between Chinese private firms and SOEs in workforce localization: private firms have a greater economic incentive to localize, while SOEs also have political incentives.

Almost every Chinese manager in Africa we have interviewed has recognized that advantages of localization — a lower wage bill, improved government relations, and local knowledge acquisition — outweigh such drawbacks as loss of control functions, less specialized employee experience, and slower work pace. Many managers seek to deepen the trend and recently some Chinese firms in Africa, each with thousands of employees, have exceeded 99% localization, including Kiluwa Mining Group and China Africa Agricultural Investment Co. in Tanzania, Sino-Steel subsidiaries in South Africa and Zimbabwe, Akosombo Textiles in Ghana, Beijing Geophysical Prospecting in Nigeria, and Jinchuan in Zambia.

Localization of workforces at Chinese enterprises is already well-developed and, generally, the longer Chinese firms are in Africa, the more they localize. Africans elites may not regard that as sufficient however. Their focus on management positions is a source of discontent, but media-created stereotypes play a great role. One stereotype is of few locals at Chinese firms, but many at other foreign companies in Africa. Western firms have had a much longer tenure in Africa than their Chinese counterparts, enabling them to grasp the low-hanging fruit of African resources and markets, generate greater profits, and pay higher salaries to attract Africa’s talent. Our cross-national data nevertheless indicate that because there are now Chinese firms with some years on the continent, Western firms do not generally have higher localization rates.

Another stereotype is of Chinese firms unwilling to localize because they ethnocentrically seek to isolate Chinese from Africans or because the Chinese government sees Africa as a dumping ground for surplus labor. Chinese with SMEs in Africa however are more likely than Western expats to live among Africans and learn local languages. China’s exporting its surplus labor also makes little sense, because Chinese in Africa who work for significant firms – as opposed to being self-employed and migrating on their own – number only in the tens of thousands, but derive from a nation of 1.4 billion people.

To encourage Chinese enterprises to further contribute to employment, African political actors and media should recognize that these firms understand the net benefit of localizing workforces, increasing local content in operations, and bridging cultural gaps between Chinese and Africans. Myths about Chinese firms’ putative non-localization should be abjured and those propagated for political ends by anti-Chinese political forces should be counteracted, so that Africans can move on to reality-based job issues within the China/Africa relationship. Localization can still be deepened however by collectively systematizing investors’ legal obligations to localize, through promulgating guidelines, quotas or job reservations, while also ensuring timely issuance of work permits for non-localized positions.

To enhance employment through Africa/China links, African governments should also avail themselves of the advantages that flow from the imbrication of politics and business in Chinese SOEs’ operations. During the 2008-2009 Global Financial Crisis, when non-Chinese foreign-owned mining firms in Zambia were closing up shop or laying-off workers, the SOE China Non-ferrous Metal Mining Group (CNMC) promoted a counter-cyclical “three no’s’” policy: no layoff of workers, no cutbacks in investment, no abandonment of expansion plans. It bought a mine abandoned by a Switzerland-based firm, recalled its workers, and hired a thousand more to open up a new ore body. The Chinese government’s endorsement of CNMC’s policy went some way to countering claims by the opposition Patriotic Front (PF) that “the Chinese” do not contribute to employment, and after the PF attained power in 2011, it backed away from its anti-Chinese stance. African governments could work through China’s government, its SOEs and even some private Chinese firms, to generalize a “three no’s” policy for the continent.

African governments can also further employment by fostering a greater role for Chinese companies in increasing investment in labor-intensive manufacturing and services. Chinese firms already are the main contributors to laying foundations for Africa’s industrialization, through building infrastructural prerequisites. The Chinese state manages key aspects of outbound foreign direct investment to Africa, making it the world’s most likely external actor to encourage firms to take the risks that come with large-scale development of industry and services on the continent. African states together have the sovereignty and politically-based agency needed to get the Chinese state to take such measures.

Finally, raising labor standards can benefit employment by creating conditions propitious for expanded enterprise activity. Some sources erroneously imply that Chinese firms are the super-exploiters of Africa: Obama, in a remark interpreted as referring to China, told Africans, “You produce the raw materials, [sell] them cheap and then all the way up the chain somebody else is making the money and creating the jobs and the value.”In fact, Chinese firm practices are worse in some respects, the same in most, and better in other aspects than those of foreign investors generally. Chinese and African governments can however influence firms to adopt a long-term view and improve wages and benefits even where they are not yet profiting. They would thereby create more stable workforces and obviate problems of the kind encountered by Sucoma, a privately-owned Chinese sugar producer in Madagascar that experienced widespread rioting in 2014, in part because it paid some workers little more than a dollar a day. Sucoma claims to have “created 10,000 direct jobs throughout Madagascar, including 90 Chinese citizens."It is thus one of those 99% localized companies, but that alone can satisfy neither Africans nor Chinese.

Their forthcoming and most recently published monographs are 中國在非洲：話語與實踐 ( 北京：中國社會科學文獻出版社, 2015) and The Chinese are the Worst?: Human Rights and Labor Practices in Zambian Mining” Maryland Series in Contemporary Asian Studies no. 210 (Baltimore: University of Maryland, 2013).