China as the World’s Technology Leader in the 21st Century: Dream or Reality?

Since opening its economy to market forces, China has grown into a global economic powerhouse whose influence on global markets is widely acknowledged. In spite of this worldwide recognition of China’s economic prowess, however, few believe that it has the capacity to assume global technology leadership. High-tech and innovative products and services are rarely associated with China. However, in a recent co-authored study, I argue that a confluence of three major factors—the ongoing growth of China’s domestic markets, the government’s relatively unfettered capacity to enact industrial policy that favors what it calls “indigenous innovation”, and broader forces associated with globalization such as mergers and acquisitions (M&A) and cross-border transfers of human capital, knowledge, and technologies—has China poised to become the world’s leading producer and exporter of technology (Sharif & Huang, 2015).

Four useful criteria for assessing technology leadership include, first , research and development (R&D) intensity, which measures absolute amounts of R&D expenditure and serves as a basis for international comparison. Second, the total number of R&D personnel within a country measures the degree of commitment of human resources to R&D. Third, the number of scientific publications as well as the frequency with which such publications are cited by others indicates the contributions of a country’s scientists and engineers to relevant knowledge creation. Fourth, the number of patents applied for under the Patent Cooperation Treaty indicates the extent to which innovations become practical and ultimately find commercial application. Based on these criteria, there is strong evidence that China has been developing its scientific, technological, and innovation capacity at a pace that will enable it to become the global technology leader in the coming decades.

Considerable skepticism regarding this idea exists. Most observers argue that China fulfills its technology needs primarily by importing technologies from other countries, pursuing a short-term, low-technology, low-profit manufacturing strategy rather than building its capacity to move up the value-added chain. On this view, China participates in innovative activities only in stages of production that add little to industrial innovation. Moreover, many believe that China’s political and business culture lacks critical institutional support, such as trust within and between organizations and the government.

Such skepticism, however, overlooks the three abovementioned factors that provide China with the necessary resources and competitive advantage to eventually assume global technology leadership. First, China’s growing domestic market, now second only to that of the U.S., is likely to surpass the latter in buying power by around 2020. Second, its centralized system of government enables China to shape industrial policy to a far greater extent than is possible in any Western country. Third, China can leverage its growing role in international markets to acquire advanced technologies while increasing its capacity to undertake advanced R&D, often in partnership with foreign interests seeking access to the Chinese market.

The United States assumed global technological leadership from Great Britain early in the twentieth century, and currently China enjoys similar advantages that should enable it to assume that role in the twenty-first century. First, as America grew and prospered in the nineteenth and early twentieth centuries, it became the world’s largest consumer market. Second, the U.S. government invested in infrastructure and technology, encouraging entrepreneurs to pioneer industrial processes and transform raw materials into products with worldwide demand. Following World War II, American commitment to large-scale industrial innovation propelled it to the top of virtually every consumer good and manufacturing market across the globe.

Now China’s growth has positioned it to overtake the U.S., even if it is unlikely to dominate to the same extent. China’s massive domestic market favors Chinese manufacturers, who are better able to satisfy the unique preferences of Chinese consumers. Market size has long been associated with innovation, and Chinese firms serving their huge domestic market benefit from advantages in proximity and cultural affinity. At the same time, however, Chinese firms are producing manufactured goods on a broad scale, having assumed global leadership in steel, cement, automobiles, fertilizer and many other products that are now entering export markets. Partnerships with foreign firms generate technology spillovers that benefit Chinese firms and accelerate innovation and high-tech development .Forecasts call for China’s overall economy to surpass the American economy by 2020.

The Chinese government’s willingness to invest in innovation and technology to boost manufacturing also mirrors America’s. In recent years, China has allocated approximately 2% of its GDP to R&D activities (as illustrated in Figure 1), and has already become the world’s second-largest conductor of R&D, with growth in R&D intensity of around 20 per cent per year. Leading this effort is the Mid- and Long- Term Science and Technology Development Plan for 2006–2020, which promotes ‘indigenous innovation’ and seeks to equal the U.S. in R&D intensity by 2020. The launch of this initiative coincided in 2006 with a plan to invest in and promote the wind power industry through indigenous R&D investment, regulatory support, concessions to wind power projects and favorable tariff policies. While installed wind power capacity in China was near zero as recently as 2005, by 2010 one in every three new wind installations worldwide was in China, cumulative installed capacity was ranked first, and the top four Chinese wind turbine manufacturers were all in the global top ten.

The third factor offering China a competitive advantage on its way to global technology leadership is globalization, which provides China’s economy with multiple channels for acquiring advanced technologies. While this involves a fair amount of M&A activity in which Chinese firms merge with or acquire foreign firms, much new technology is coming into China through acquisitions of and partnerships with technology and R&D organizations within larger corporations. Indeed, as seen in Figure 2, China ranked third worldwide in outward foreign direct investment (FDI) by 2012, leveraging the global financial crisis to raise its outward-FDI game.

Taken together, China’s ability to leverage its competitive advantage in terms of market size, government industrial policy, and globalization spillovers and acquisitions has positioned it to achieve its goal of global technology leadership. The recent slowing of Chinese economic growth could affect the timing of this assessment, but over the long term I believe these factors will prevail. China’s economy has for decades outpaced the global economy and virtually all national economies; many analysts have seen that rate of growth as unsustainable and a slowdown as inevitable. Moreover, the government’s reluctance to undertake the structural reform that many regard as necessary may be weakening; the recent loosening of its grip on the renminbi may signal an emphasis on structural reform over boosting growth. Yet even if China never returns to double-digit growth, it will continue to generate more output than in the past when it grew more rapidly. Moreover, China’s commitment to attaining technological leadership shows no signs of letting up; if anything, slower growth in low-end industries will only encourage China to redouble its efforts to grow its technology footprint. 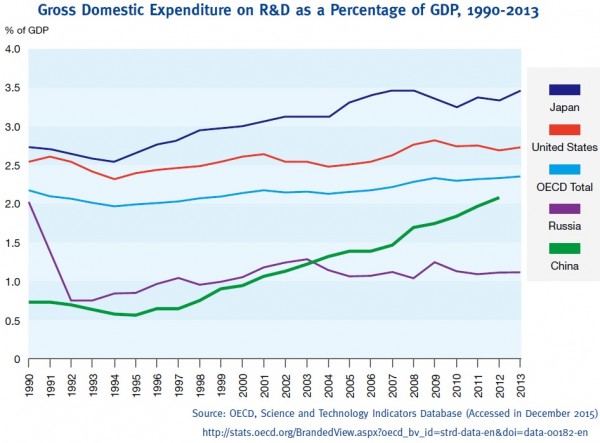 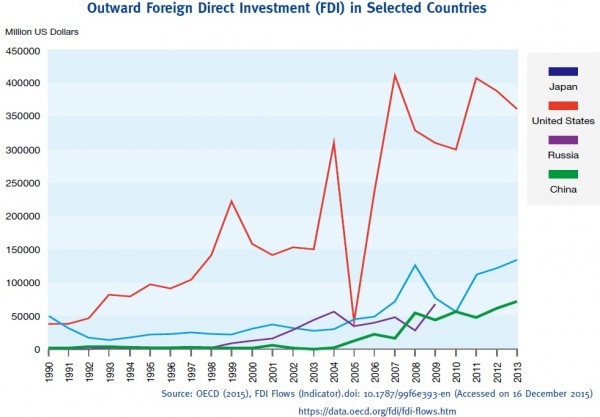 China’s ascent to global technology leadership will have profound implications for world markets and global industries. While firms from developed economies may seem best positioned to take advantage of China’s tech growth, opportunities for companies from emerging economies abound as well. Corporate executives in emerging markets whose firms trade in any of the targeted industries mentioned here should expand their horizons to take advantage of opportunities in both industry and academia. China’s commitment to new technologies with economically strategic value suggests a theme: emerging economies should target emerging technologies in China.

Consider, for example, the recent agreement reached between the China National Nuclear Corp (CNNC) and Argentina’s state-run energy company, Nucleoeléctrica, for work involving two nuclear power plants in Argentina. Chinese banks will provide 85% of construction funding for the first project, which involves a Canadian nuclear reactor technology, with an Argentinian manufacturer providing 62% of the equipment and the CNNC providing 38%. The CNNC will, however, deploy a pressurized water technology from China known as Hualong 1, the third generation of nuclear technologies developed by China, at the other plant.

The message to emerging market enterprises is, then, that in spite of slower economic growth in China, the government’s commitment to achieving technology leadership will continue to create opportunities for emerging market investment and collaboration.

Naubahar Sharif is an Associate Professor in the Division of Social Science at the Hong Kong University of Science and Technology, and a Faculty Associate of HKUST IEMS. He earned his PhD in ‘Science and Technology Studies’ from Cornell University in 2005 and completed the Executive Education Program in Innovation for Economic Development at Harvard University in 2011. He has published numerous academic articles in leading journals including Research Policy, Science and Public Policy, International Journal of Technology Management, and Science Technology and Human Values, and has received external funding from the Research Grants Council (RGC) of Hong Kong under the auspices of the General Research Fund (GRF) as well as the Public Policy Research (PPR) fund. Naubahar also consulted for the Innovation and Technology Commission (ITC), HKSAR Government from 2006 to 2010. His research interests include the innovation-related linkages in Hong Kong, and between Hong Kong and Guangdong Province.