Can China Stay Ahead in the Global Patent Race? 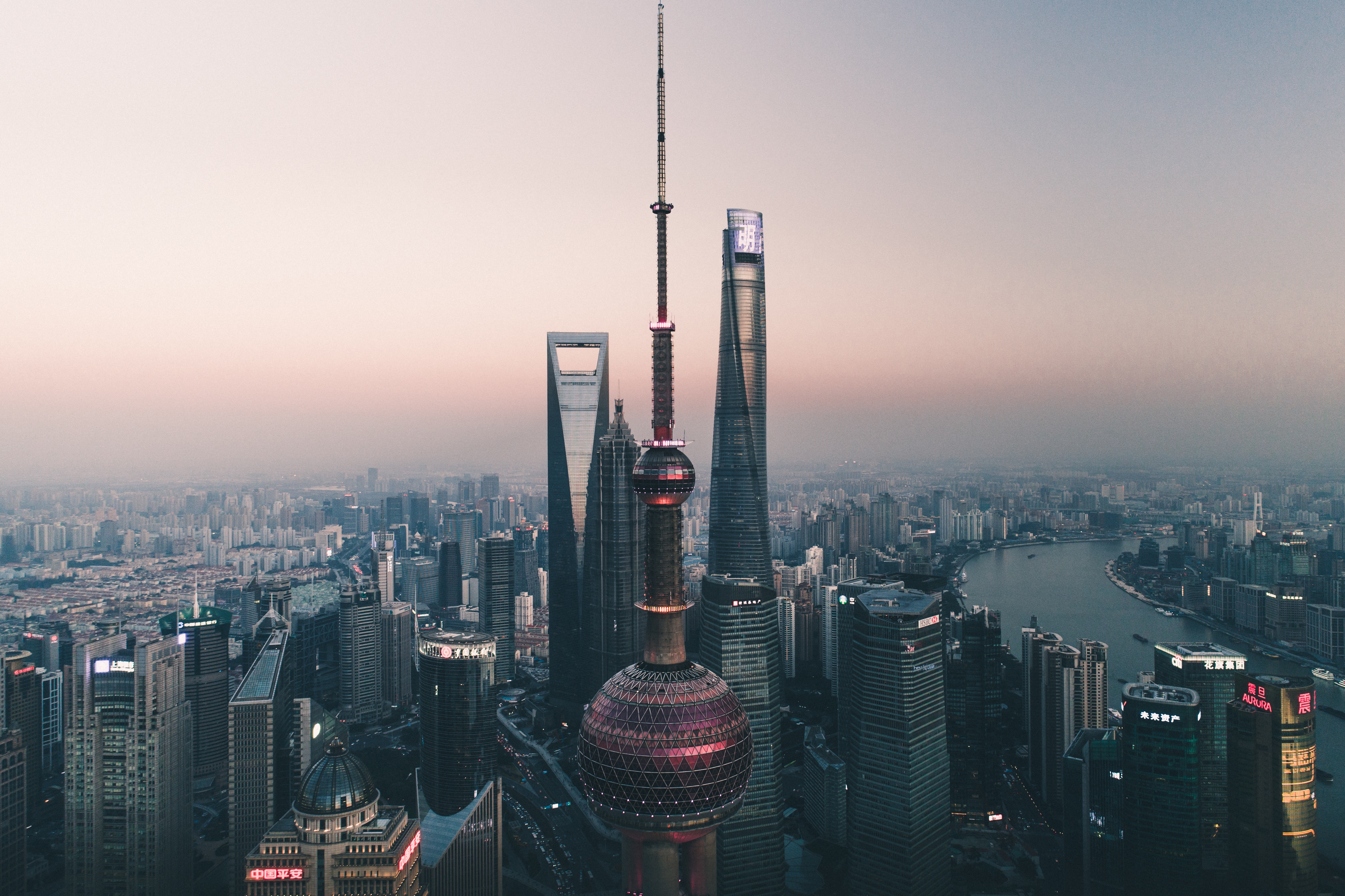 China’s ascension as a global economic power seems irreversible, but in some areas the country has yet to achieve parity with the United States, the European Union, or Japan. For example, although the renminbi has been included in the International Monetary Fund’s “basket” of reserve currencies (along with the U.S. dollar, the Euro, the Japanese yen, and others) it is unlikely to become a safe haven currency until China achieves certain benchmarks in financial market development and liberalizes its financial markets. However, China is making impressive progress at boosting its standing in technology, thanks to several ambitious policy initiatives. This progress is borne out by the recent increase in the number and value of patent applications that have been filed in the country.

To understand how China could attract more patent filings from multinational corporations (MNCs), it is important to gauge its status vis-à-vis that of the three most prominent patent offices: the United States Patent and Trademark Office (USPTO), the European Patent Office (EPO), and the Japanese Patent Office (JPO). Such an assessment should inform policies to encourage MNCs to conduct research and development (R&D) operations in China, and to file for patents with China’s State Intellectual Property Office (SIPO).

The gold standard of patent value is based on the notion of a patent family, which is a set of patents filed in multiple countries to protect the same invention or innovation. A triadic patent family, then, is a set of patents filed in three countries. This term has become associated primarily with patents filed and running concurrently in the USPTO, the EPO, and the JPO. More recently, researchers interested in studying growth and development in emerging economies have coined the term “quadic” patent, which is a triadic patent to which a patent in a fourth country is added. If China is to achieve all of its goals related to becoming a technology powerhouse, it must elevate patents filed with the SIPO to a status commensurate with that of triadic patents, making it the de facto fourth country involved in a new gold standard of quadic patents.

Chinese progress in global patenting features an ambitious drive spanning the terms of presidents Hu Jintao and Xi Jinping to make the country a leader in high technology. While China’s traditional manufacturing model has posed challenges to this effort, it continues to rise in global technology rankings along several metrics. For example, China is projected to equal R&D spending in the United States as soon as 2020, reflecting its commitment to ‘indigenous innovation’. China’s progress in patenting lags behind these achievements, but that too is changing rapidly.

Patent filings under the Patent Cooperation Treaty (PCT) administered by the World Intellectual Property Office (WIPO) suggest that China is moving up in global rankings. It recently ranked second in PCT patent filings in 2017, behind the U.S. The value of patents filed in China, as measured by patent renewals, is also rising dramatically. While the value of patents filed by foreign entities far exceeded that of patents filed domestically in the early 1990s, by the early 2000s there was rough parity, and the gap in numbers of patent filings between foreign and domestic entities was narrowing . It is worth noting, though, that patents filed by MNCs and other large entities are generally more valuable than those filed by smaller entities, and this fact matters for emerging economies such as China seeking to participate in global patenting activities.

A recent study by Hong and Jacob (2014) finds that China’s inclusion in quadic patents is rising, and it is likely now the leader in quadic patenting: more quadic patents include China than any country other than the United States, the European Union, and Japan (Figure 1) . China has emerged as an important target for companies seeking to protect their inventions or intellectual property rights (IPR), suggesting that emerging economies are increasingly viewed as viable sites for patenting. This is also in part due to the lower costs of conducting R&D in emerging economies, which is attracting investment by MNCs in R&D facilities and collaborations with domestic firms.

The findings of Hong and Jacob (2014) could help Chinese policymakers focus their efforts on specific areas of technology development that would further bolster its status as a leader in quadic patenting. The authors investigate the factors affecting MNCs patenting strategies by building two unique data sets, combining data on patents, production, and trade for a sample of 19 two-digit manufacturing industries in China over an 18 - year period, and a sample of 38 countries for a 20-year period. They find that four factors in particular attract MNCs to file for patents in particular countries. The first is the potential and importance of the local market, as measured by market size and expected sales revenues in the country. Second, MNCs seek patent protection in countries that are regarded as posing an imitative threat - that is, where domestic firms are capable of imitating MNCs’ technologies. Third, they are more likely to file for patents in countries featuring strong IPR regimes. Fourth, they are more likely to file for patents in countries in which they conduct R&D.

The findings reported in this study suggest that China is well-positioned as an emerging economy to figure prominently in MNCs’ patenting strategies. In particular, the size and ongoing development of the domestic Chinese market — projected to become the largest in the world within a few years’ time — elevate its status among emerging economies to the top ranking. China’s continuing push to move up the global value chain technologically also bodes well for its prospects as a quadic patenting country.

Figure 1: Proportion of Quadic Patents Including China (as Compared to Selected Other Countries) 1985-2010 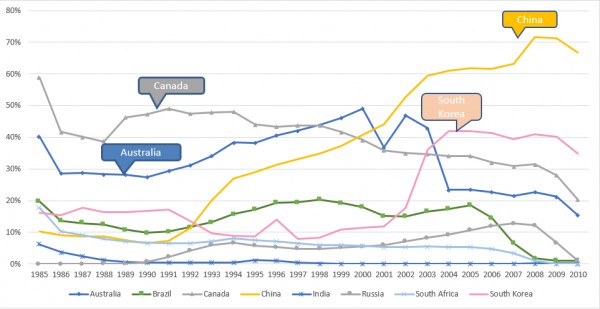 If we consider the four factors mentioned above that induce MNCs to include emerging economies in quadic patents, China has the market importance factor covered. It is to the other three areas — the level of technology development, IPR protection, and R&D operations — that it should direct its attention.

China is indeed continuing to make progress towards its lofty technology goals that fall under the indigenous innovation rubric, but if it is to attain the status it seeks for SIPO as a patent office, it must continue these efforts. In this respect it should maintain its investments in R&D under the “National Mid-and-Long Term Science and Technology Development Plan for 2006– 2020”. This should eventually enable its enterprises to develop R&D capabilities and facilities, allowing it to both pose an increasingly effective imitative threat, and to attract MNCs either to partner with them or to conduct R&D on their own in China.

The only factor in which China lags, is its IPR protection regime. China has developed a reputation for violating IPR that complicates its trade relations with other countries. Many observers see the failure of the United States to enter the Transpacific Partnership as a golden opportunity for China to enhance its trade relations with the other signatories, and the Belt and Road initiative provides powerful evidence of China’s commitment to opening its economy to economies across Eurasia. However, until China reforms its IPR protection regime to far exceed World Trade Organization (WTO) standards, it may well fall short of its ultimate goals as a technology giant. The most recent signs suggest China's leadership has developed a consensus that favors a stronger IPR regime. Indeed, the recent establishment of the specialized IP courts and amendments to the Patent Law represent moves toward strengthening that regime.

Naubahar Sharif is Associate Professor of Social Science and Public Policy, and an IEMS Faculty Associate. He has published numerous articles in leading academic journals and has been awarded external funding from the Research Grants Council (RGC) of Hong Kong under the Collaborative Research Fund (CRF) scheme, the General Research Fund (GRF) scheme, and the Public Policy Research (PPR) scheme. Under the auspices of Hong Kong’s Central Policy Unit, Prof. Sharif has received funding as a co-investigator, for a Strategic Public Policy Research (SPPR) proposal to study the potential of China’s Belt and Road Initiative to benefit Hong Kong through trade and investment. Prof. Sharif consulted for the Innovation and Technology Commission (ITC) of the HKSAR Government from 2006 to 2010. His current research focuses on innovation and technology policymaking in Hong Kong, the impact of the China’s Belt and Road Initiative in Pakistan, and the process of industrial automation and robotics in Southern China.